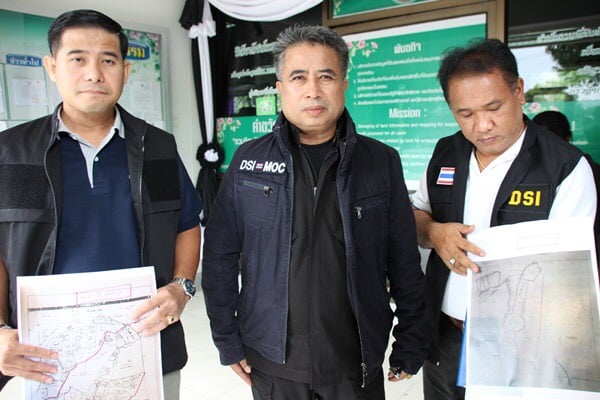 The DSI (Department of Special Investigations) are checking two luxury houses located on Pa Kuantohla and Pa Laemsam mountains alongside another 2,000 rai of land that is alleged to have an illegal land deed.

After checking the land document at the local land office, DSI have found that the names of landlords are a famous millionaire and his children who have owned the land for more than 10 years. Their names haven’t been revealed.

The Director of Marine and Costal Resources Centre, DSI, Pichet Thongsrinun went to Takuatung Land Office in Phang Nga to check the documents of the national park land to investigate the process of issuing the land deed of the 2 houses.

“Initially, we only found the land deeds issued on the tip of the mountain covering 14 plots (including the 2 houses) but after a detailed check and aerial photographic mapping, we found that there are more land deeds in the area covering a total of 33 plots on 2,000 rai which we believe are on the same national park mountains. They are of type Nor Sor 3.”

The DSI haven’t yet revealed the name list of accused landlords. The land papers are still being investigated.