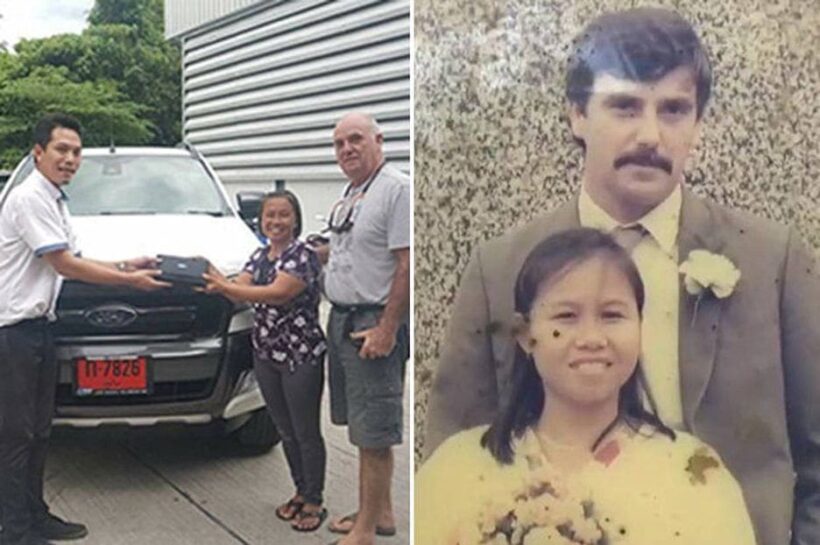 Three men have confessed to the murder of a missing couple – a British expat and his Thai wife – in Phrae. Police say the three men were hired by the woman older brother to kill the married couple.

Police made the arrests in Wang Chin district late yesterday. They say they eventually had the confessions after hours of ‘intense’ interrogation.

The couple went missing last Thursday after after a friend raised the alarm saying they didn’t respond to messages or phone calls since last Tuesday.

They’ve confessed to killing 64 year old Alan Hogg and his 61 year old Thai wife Nod Suddaen. They say killed them at the couple’s sprawling home and then buried the bodies in the garden. Blood was found on the walls of the mansion.

The three have implicated the alleged mastermind, Warut Satchakit, the brother in law of Mr Hogg, and say they were each paid 50,000 baht to commit the murder.

Khun Warut remains on the run.

They say they first shot Mr. Hogg and then used a hammer to beat his wife to death in front of the garage. They claim that Khun Warut moved the bodies to bury in the garden.

Warut was initially arrested after CCTV footage identified him as the person who entered the couple’s home and later drove away in their pick-up. He was charged with theft of the vehicle but was later released on 100,000 baht bail raised by relatives. He has not be seen since.

The pickup was found in Ayutthaya yesterday and impounded for further forensic investigation.

An investigator from the Phra That Chor Have police says that investigators found a backhoe near a hole that had been dug in the garden but found no signs of the bodies at the time.

Excavators were brought in this morning to dig in the same area and eventually uncovered the buried bodies.

Police also report that the pickup had been bought from a Thai couple by a Lao man. The deal to purchase the pickup was finished on Friday. The Lao man, hearing about police searching for the vehicle, reported to police on Sunday night, turning over the pick-up for examination. Both the Lao man and the two sellers of the vehicle were interrogated by police.

Major General Sanpat Praputsra says, “The issue is likely to be a long-standing conflict within the family. We cannot find any other situations that are likely to have caused this. The brother-in-law had problems with money and there were family issues.”

Police find bodies of Briton, Thai wife buried behind their house in Phrae