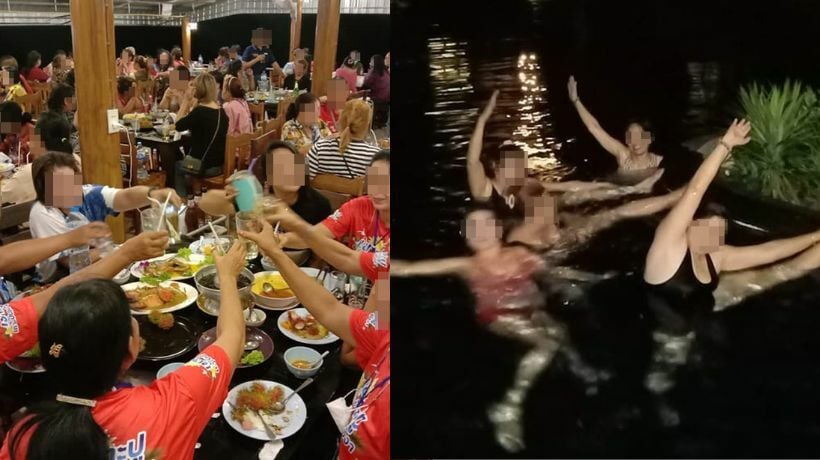 Thai netizens have slammed government officials in the central province of Pathum Thani for wasting taxes on a pointless trip to Phang Nga and Phuket.

Government officials from the Mueng Tha Khlong District were supposed to be taking part in a working seminar to develop women’s potential in Phang Nga, and Phuket, from June 23 – 26. But the non-profit organization, Anti-Corruption of Thailand, criticised the government on its Facebook page, ปฏิบัติการหมาเฝ้าบ้าน, saying they used the 490,000 baht trip as a holiday.

The pictures posted on the non-profit organisation’s Facebook page were taken from the Facebook accounts of the seminar participants.

The picture captions were cutting. One said, “Others might go to the sea to escape from love and hot weather, but we escape from work.” Another said, “Go to Phuket! Thanks to the kind sponsors,” and another, “Wonderful activities for Tha Khlong women.”

The Mayor of Mueng Tha Khlong district, Suthep Wongjaeng, defended the trip saying the project was aimed at improving the skills and potential of women in the community. He explained that the participants joined a seminar about being a leader in the digital era.

Suthep added that the group also visited women’s communities on Koh Panyi Island in Phang Nga, and Phuket to learn how those women work and use their free time to earn more family income.

Suthep says the group travelled there with a reasonable objective, and posting pictures on social media was a normal thing people did.

Many Thai netizens commented on the Facebook post, and most people agreed with the criticisms, that the trip seemed pointless and money wasted. Comments posted included, “That’s the result of my taxes,” “After relaxing, don’t forget to smile while servicing people too,” and “They followed the government’s measures, Thai people should travelled in Thailand.”

Phuket welcomes more than 1.7 million travellers so far in 2022