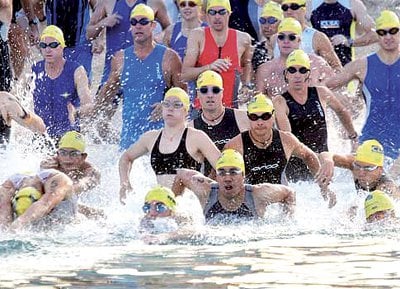 PHUKET: Defining and developing ‘Brand Phuket’ as a world class sports tourism destination was top of the agenda at a recent meeting of senior business people here.

Organized in collaboration with the Phuket PR Network and the Greater Phuket Chapter of the American Chamber of Commerce (AMCHAM), the meeting was held at the Thanyapura Sports and Leisure Club (TSLC) on May 24.

The opening address was given by Gazette property columnist and Managing Director of the Phuket-based C9 Hotelworks, Bill Barnett.

Begging the question about the implications of sports tourism for “Phuket’s stakeholders”, Mr Barnett emphasized the lure of Phuket. “People who’ve moved to the island in the past few years [did so because they] were driven by the lifestyle, education and sporting opportunities available here.”

Following his observations, Natasha Eldred of the Phuket PR Network introduced the panel.

“When brand guru David Keen at an AMCHAM meeting [on November 30, 2011] asked the question ‘What is Phuket?’, no one was able to answer. The room fell completely silent,” she recalled.

“This silence reinforces the fact that no one has yet come up with a distinct brand image for Phuket. So at this meeting, the first of a planned five-part series, we will further explore and identify ‘Brand Phuket’,” she said.

In the opening presentation, Ms Dionysius, who is Head of Destination Marketing at Laguna Phuket, highlighted benchmark sporting events such as the Laguna Phuket Triathlon, the Phuket International Marathon, and the Ironman 70.3.

She argued that we should continue to build on and nurture the island’s reputation as a sports tourism destination, emphasizing the international reach and exposure that such events have fostered.

“We want to push forward the brand of Phuket for being a major sports tourism destination. We started the Laguna Phuket Triathlon in 1994 and we’ve come from a small race, where some triathlon athletes showed up from surrounding countries, to [being] one of the biggest triathlon competitions for athletes from across the world [to] attend.

“I believe we are on the right track to promote the Phuket brand as being the sport tourism destination,” she said.

By continuing to support and promote these kind of events, sports tourism and the island’s brand will become synonymous, she argued.

The ‘bottom line’ certainly speaks for itself. Last year, for example, independent surveys found that participants and spectators at the island’s world-renowned Kings Cup Regatta spent over 40 million baht on accommodations, food and beverages during the week of the prestigious sailing competition, according to Duncan Worthington, Media and Communications Director for that event.

“The Phuket King’s Cup Regatta is known around the world as ‘the race to win’, attracting over 2,000 people from more than 30 countries joining the event. The top participating countries include Australia, the UK, Russia and Japan,” said Mr Worthington.

Going on to highlight the potential of the domestic market, Mr Worthington named golf, Muay Thai and even football as sports that we can expect to see and hear more of in Phuket’s future.

While more athletes and spectators equates to increased cash flow in the economy, meals, tickets and reservations are not the primary source of sports revenue.

A marketing veteran backed with nearly two decades of experience, Paul Poole focused his speech on the need to successfully integrate sponsorship into destination events. Mr Poole’s company, The Sponsorship Experts, currently coordinates sponsorship for dozens of events and agencies in Phuket.

“Sporting events get the most sponsorship throughout the world,” he said, adding that organizations should focus on segmentation for particular kinds of sponsorship using tier levels, and that events must offer clear and tangible incentives to companies.

The closing speaker was Nicholas Seaver, CEO of TSLC.

A Harvard graduate who has worked with former US Vice President Al Gore on climate-change, Mr Seaver said he moved to Phuket in order to pursue the vision of TSLC, which integrates the appeal of a luxurious resort destination with the facilities needed for world-class athletes to train.

“I’ve learned that the new trend in tourism aims toward health and wellness activities. That is why we provide a retreat center, an integrative health center and mind center… to attract new groups of tourists,” said Mr Seaver.

He highlighted how efforts to brand the TSLC facility as the most desirable sports center in Southeast Asia will benefit Phuket and help further the island’s brand positioning as a quality sports destination.

“We have a complete sports facility that is able to support all kinds of sports activities. The TSLC has a fitness center, aquatics academy, tennis academy, triathlon academy, rugby academy and football academy.

“We have hosted many important sports events, such as an ITF tennis tournament, the Phuket International Soccer 7s and the IronKids Triathlon. We’ve welcomed athletes to use our venue as a place to train – including the Netherlands’ National Triathlon Team and the Canadian National Synchronized Swimming Team,” said Mr Seaver.

But the TSLC’s efforts are not restricted to targeting professional athletes, he added.

“We also want to promote the center not only as a home for athletes and members, but also to tourists as a holistic wellness center,” he concluded.

The Phuket PR Network plans to continue its Brand Phuket series of seminars. For more info visit: phuketprnetwork.com.
Games to bring in B600mn

Hundreds of millions of baht will be in circulation on the island thanks to Thailand’s 28th National Youth Games which began on May 24 and will last through June 5.

Governor Tri Aukaradacha revealed the official projection during a visit to the Games’ press center at the Royal Phuket City Hotel on Sunday evening.

“We expect that this event will inject no less than 600 million baht into [the economy of] Phuket.”

“I have ordered the Department of Internal Trade to look after and regulate prices to be fair for all the organizers, athletes and spectators coming from other provinces across the country.

“Also, [I’ve asked them] to make brochures that can recommend products, whether food or souvenirs, to leave a good impression with visitors to Phuket. I’d like to ask all in Phuket and neighboring provinces to come out and cheer on the athletes who have come to compete in this event. This will encourage all of them [the athletes],” he concluded.

Dubbed ‘The Phuket Games,’ this is the second time Phuket has hosted the event, with more than 20,000 athletes, spectators and organizers estimated to take part. The first Phuket Games took place in 1990.

The Games’ mascot, now being sold in Phuket, has become a very popular souvenir.