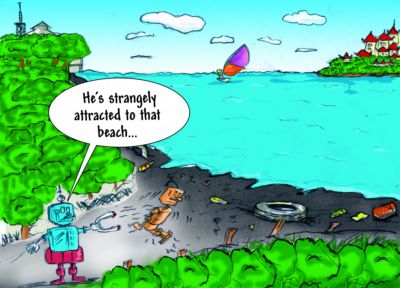 PHUKET: Phuket has a long and somewhat checkered history of past industrial development dating back to its tin-mining era, which petered out over the final decades of the last century and finally ended for good in 1992 with the closure of the last mine on the island.

[See ‘Riddle of the Sands’, current issue of the Phuket Gazette. Digital subscribers click here to download the full newspaper.]

In these air-conditioned days of digital data, internet and numerous other advances in technology, it is perhaps understandable that there are many among us who tend to romanticize the tin-mining days.

Tourists are encouraged to visit the island’s old commercial center along Thalang Road, which before the radical transformation of Phuket’s coast by tin-mining dredges was not far from its natural, sandy waterfront.

The images we are fed of this period include women in Peranakan attire being pulled along in rickshaws, dance halls and pipe-smoking businessmen proudly posing with the latest tin-mining technology, which was literally “cutting edge” at the time.

In many concrete re-creations of the original Sino-Portuguese homes once found in the area, we are presented with bric-a-brac carefully displayed to evoke a sense of nostalgia for bygone days. The period is often portrayed as a simpler time, free of all the stresses of modern life.

The reality, however, is that few among us – with the possible exception of migrant workers from Burma – could begin to imagine the hardships faced by most people living in Phuket a few hundred years ago.

Child mortality rates were incredibly high by modern-day standards, while very few people ever made it to 50 years of age. There were no hospitals or dental clinics. Infectious diseases, including malaria and syphilis, were rampant. It is little wonder that opium abuse was rife among those who could afford it.

While a small fraction of wealthy merchants might have taken pleasure where they could find it, life for the vast majority of coolies who did the back-breaking work of extracting tin ore from bedrock was little more than a back-breaking struggle to simply survive.

Efforts to use Phuket’s tin-mining past to bolster the island’s modern-day tourism industry may eventually prove successful, but a comparison of the crowds found at the highly-informative Tin Mining Museum in Kathu with those found at island beaches indicate we have a long way to go before the museum’s contribution amounts to a significant slice of the tourism revenue pie.

Perhaps, rather than trying to romanticize our tin-mining past, more effort should go into helping us appreciate the incredible sacrifices our ancestors made so that we could enjoy all the wonders of modern technology we now take for granted in Phuket.