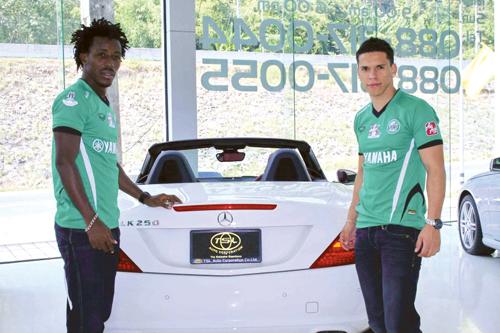 The players had their photos taken with the luxury cars on offer as a way to say thank you to TSL.

TSL Auto Phuket branch GM Anek Tipparak told the Phuket Gazette that TSL wants to sponsor and support local football in Phuket, as well as promote his brand to the international community, many of whom are passionate about the sport.

“Our company wants [to attract] clients who are interested in premium cars,” said Mr Anek.

Mr Anek clarified that his brand awareness building strategy was not limited to Phuket fans.

“Phuket FC played well in Thai Yamaha League 1 last season and I think more people will learn to recognize the TSL brand across the league.”

Indeed, the club’s marketing and PR activities have increased this year, with the club operating under a budget of more than 90 million baht, the largest amount so far since its official incorporation in 2009.

The official logo of TSL, a Bangkok headquartered firm, first appeared on the club’s jersey late last season, with many local fans initially unable to identify the company, which had only officially opened its Phuket showroom early in 2012.

In addition to live exposure, sponsors can enjoy national exposure of their brand with many of the 34 league matches due to be televised on national cable television, although exact broadcasting details have yet to be finalized.