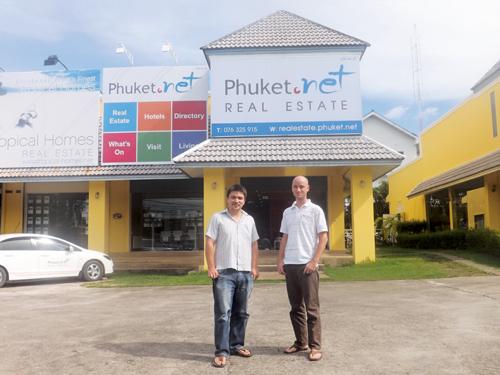 PHUKET: Although the concept of 360-degree virtual tours has been around for almost as long as the world-wide-web itself, such technology has only recently begun to yield its true potential.

Thanks to the advent of developments in global positioning systems (GPS), camera technology and improved user interfaces, businesses the world over are poised to reap a plethora of benefits.

“StreetView allowed companies to start opening themselves up, allowing potential clients, wherever they are in the world, to have a look around before actually coming. However, StreetView can’t go everywhere,” he said.

Such a limitation turns out to be an opportunity.

Building on the virtual floor-plan platform, Phuket.Net for the past year has been taking 360º shots of properties, businesses and other attractions across the island.

The shots are embedded onto the website’s business directory, its recently launched 360º portal, and also uploaded onto YouTube. Meanwhile, clients can embed the finished shots onto their own websites or other preferred web-based media channels.

Asked how online virtual tours are more viable now compared to a decade ago, Richard explained: “In the past, such 360º virtual tours were dependent on downloading additional plugins or were simply incompatible on some platforms.”

Now, web browsers have become more advanced, while new industry standards, such as HTML-5, have emerged.

“This allows users on iPads, iPhones, Android and other smart-phones and tablets, which have gyroscopes, to physically pan around in virtual reality, which is the next best thing to being there.”

Richard added that StreetView, by itself, still has a number of other limitations.

“We’ve found that there are often inaccuracies with geo-coordinates. Google still hasn’t made it convenient for anyone to update data or information. When we do a 360º shoot, we also update the company’s exact coordinates and heading – the starting view.”

So far this year, Phuket.Net has shot and indexed about four hundred 360-degree virtual tours across the island, including some 250 villas & condos, 50 businesses and 100 tourist attractions such as beaches, viewpoints and temples.

A recent benchmark for the project was shooting Jungceyclon shopping center in Patong, which included a total of 30 360º shots integrated into the site’s multi-tiered floor plan.

Commenting on strategy for the coming year, Kit Fordham, general manager, said: “In our first year, our focus was mostly on real estate – which didn’t require so many shots.

“With complex floor plans, we are able to do multiple shots for larger businesses such as hotels, shopping malls and hospitals, and are investing in more equipment and hardware to keep up with increasing demand.

“In the coming year, we will shoot and index more of these larger projects as well as other interesting spaces such as yachts, surrounding islands and going further off the beaten track. For example we have just shot the interior of Hong Island in Phang-Nga Bay.”