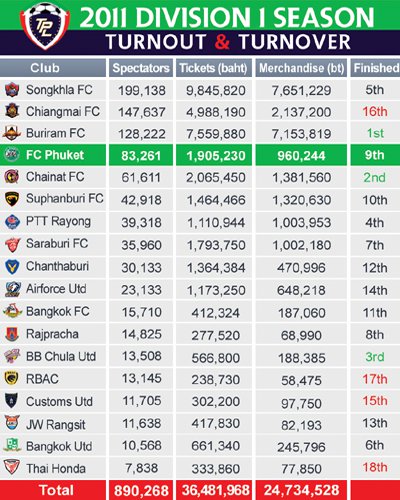 PHUKET: Despite having nearly been dissolved due to swelling debts, FC Phuket 1688 Co Ltd generated the fifth highest turnover out of 18 Division 1 clubs, statistics released by the Thai Premier League (TPL) have revealed.

Concluding last month, the 2011-2012 season’s tallied receipts show that the Southern Sea Kirin had generated more than 2.8 million baht, which equates to 4.5% of total revenue generated in the league.

Meanwhile, another Southern Thai club, Songkhla FC (who have now changed their name to the Fighting Bulls United) earned honors for the league’s highest turnover and turnout.

Generating more than 17.4 million baht, or 28.4% of league revenue, the Southern Fighting Bulls led the tally for total number of tickets sold (199,138), total revenue from ticket sales (9.84mn baht), and that for merchandise sales (7.65mn baht).

Division 1 champions Buriram FC (who have now been dissolved and merged with Premier League champions, Buriram PEA to form Buriram United) had the second highest turnover, raking in 14.71mn baht, or 24% of league revenue.

This came from the sale of 128,222 tickets which produced 7.5mn baht, and merchandise sales amounting to 7.15mn baht.

The third highest turnover was produced by Chiangmai FC, which made 7.12mn baht from 147,637 tickets, the second best turnout, and 2.13mn baht from merchandise, equating to 11.6% of league revenue.

Marginally outdoing Phuket for fourth highest turnover, was league runners up, and subsequently promoted, Chainat FC, who made 3.44mn baht or 5.6% of league turnover, with just over 2 million baht coming from 60,611 tickets, and another 1.38mn baht from merchandise.

All in, combined revenue from 18 Division 1 teams last season was 61.2mn baht.

The biggest turnover and turnout from a single match was when Songkhla hosted Buriram on August 7, 2011 at Tinsulanond Stadium.

A total of 36,715 tickets were sold to spectators for that match (which ended in a 1-1 draw), generating 1.5mn baht, which is in addition to 1.9mn baht from merchandise.

That record setting turnout is in stark contrast to the overall league’s mean match attendance of a mere 2,909 spectators per game, while mean income per game stood at 80,832 baht per match.

This is compared to FC Phuket’s mean attendance at about 4,900 spectators per game, with each match producing on average 112,000 baht from tickets, and 56,000 baht from merchandise.

In spite of these enticing numbers, FC Phuket’s profitability remains at this time, in a state of untapped potential.

Club executives recently disclosed that the team utilized a budget of 34.6mn baht to cover expenses for training, recruitment and remuneration of club executives, staff and players.

The club’s biggest contributor was the Phuket Provincial Administration Organization (OrBorJor), which dished out more than 17mn baht to the team.

While a number of new sponsors have stepped forward to front at least 15mn baht to ensure that FC Phuket will be able to compete in Division 1 for the 2012 season, which begins next month, the management of funds this merry-go-round will have to be closely monitored if the club is to avoid the financial turmoil of last season.

Meanwhile, up and coming teams in Division 2 can look forward to continued financial support from the Thai government, which has allocated more than 110mn baht from the National Sports Development Fund.

Each of the 81 Division 2 teams will be given 1mn baht, with the remainder of funds to go towards competition organization, and prize pots.

The budget is being administrated and disseminated by the Thailand Sports Authority and Football Association of Thailand, with an additional amount of no less than 40mn baht also to be sourced from private sponsorship.