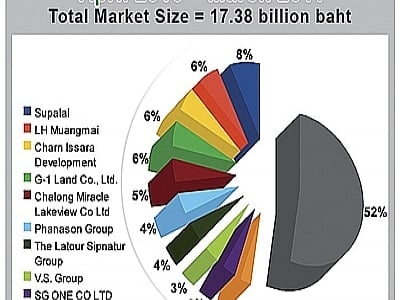 PHUKET: Demand on Phuket for condos is skyrocketing, highlighted by strong annual growth figures, which is in contrast with slumping sales of other housing types.

A survey conducted by the Research & Development Department of Plus Property Co Ltd found that 2,641 new condominium units were sold on the island from April 1, 2011 through March 31, 2012 – an annual increase of over 20%.

The annual increase in overall units sold, coupled with the drop in mean PPU, indicates that demand is up for more affordable homes in Phuket – at least in the condominium sector.

The survey also looked at the island’s markets for Single Detached Houses (SDH) and Town Homes (TH), both of which showed a decline in demand, with their respective mean PPU values rising.

According to the figures through March 31, this year, the SDH sector recorded 649 sales – down 25% from 867 units sold in the previous year.

However, due to the strong performance in the condominium sector, overall demand, when measured by the combined value of all units sold, rose by 11.5% to 19.3bn baht from 17.3bn baht.

Much of this new demand was generated by market newcomers, Sansiri PCL, who in their first six months of expansion into Phuket, became the island’s uncontested market leader for both number of units sold (1,401 units or 40% of market) and total value of those units (2bn baht or 10% of market).

Now in the island’s top seat, Sansiri replaces Supalai, another Bangkok-based developer, who led the market in the previous year when they sold 606 units (17% of market) valued at 1.3bn baht (7.8% of market).

Having sold only 86 units valued at 351mn baht in the last year, Supalai dropped out of the top 10, down into 13th place.

Though expected to reclaim some of the market in the coming year with at least one new condo project on the pipeline, Supalai, like Sansiri, will be looking to bank on their strong brand presence in order to continue to compete in an increasingly volatile market.

Indeed, a majority of the past year’s top 10 market leaders are newcomers, with Charn Issara Development PLC (5th, previously 3rd) and Kata Rocks Co Ltd (6th, previously 10th) being the only two developers that remained in the top 10 throughout the two-year survey period.

Low-, high-end demand up
Demand in Phuket for condominium units targeting the low and high income brackets spiked in the past year, while the middle section of the tier stagnated.

Marketing research (see above story) shows that 1,381 condos targeting the low-income segment (units priced less than 50,000 baht per square meter) were sold in Phuket in the past year.

This is compared to 973 sold in the previous year, representing an annual jump in demand of 41% in this segment.

Likewise, sales of units targeting the high-end (units priced between 100,000 to 199,999 baht per square meter) also jumped by an astounding 608%, marked by the sale of 255 units in the past year compared to only 36 sold in the previous year.

Measured by the total number of units sold, the proportion of demand in both segments has also jumped, with market share of low-income units rising to 52% from 44% the previous year, and high-end units to 9.6% from 1.6%, respectively.

Setting the benchmark this year, newcomers Sansiri PCL claimed 88% of condominium sales in the low-income segment.

“We are not stealing demand from others. We have generated demand based on the needs of the market. If we did not focus on development [of our offering] in this segment, such new demand and growth, as outlined in the research, would not have existed,” Sansiri CEO Apichart Chutrakul told the Gazette.