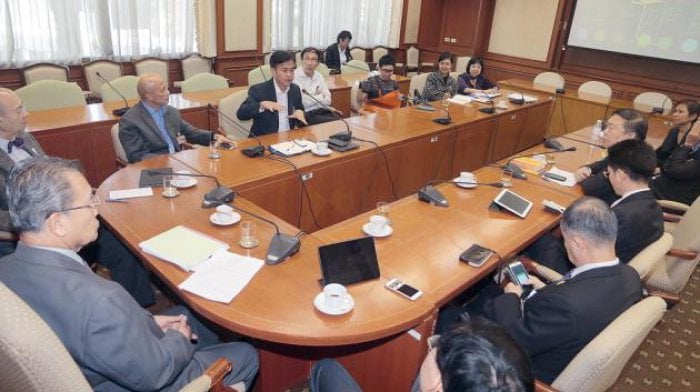 PHUKET: Top executives of Nation Multimedia Group (NMG), which includes The Nation newspaper, met yesterday with the Media Reform Committee of the National Reform Council (NRC) to express concern over a possible hostile takeover of NMG and the negative repercussions from this.

NMG chairman Suthichai Yoon led a group of the management team in an informal discussion at Parliament with the House Committee on Media Reform yesterday, voicing concern over possible media domination by Solution Corner (1998) Plc and its affiliates, which are perceived as being politically backed, through the purchase of a large quantity of NMG shares in December.

Suthichai told the committee it was imperative that the mass media be free to report news and to express opinions without being under the control of any business or political group.

He said the mass media could only be free and responsible to society when its management and majority shareholders have trust in ethics in management, business and editorial policy. Solution Corner (1998) and its affiliates bought a large percentage of NMG shares through suspicious means and this has raised doubts about its intention, the executives said. On top of this, the company already owns Spring News, a digital TV news station in the same news category as Nation TV, which is part of NMG. So, it has projected an image of attempting to dominate the news media and may have violated the conditions for the operation of digital TV, as stipulated by the National Broadcasting and Telecommunications Commission (NBTC).

NMG president Duangkamol Chotana, and Nation Broadcasting Corporation (NBC) chief Adisak Limprungpatanakij showed information that purportedly links the new group of NMG shareholders to a group of investors being now investigated by the Securities and Exchange Commission (SEC). This exposed its alleged link to a certain political group.

NMG executives reaffirmed to the House Committee that they welcomed investors buying NMG stocks with the intention of making a profit and without any hidden agenda and that they had given an assurance that all managers and staff are ready to continue to play a responsible role in reporting, expressing opinions and in scrutinising various powers on behalf of Thai society, no matter what lies ahead.

“NMG media have proven themselves over the course of 40 years, both in crises and normal times. We have played a role as an ethical media that is determinedly responsible to society. We really hope that society will assist us to continue to carry out this duty without falling under the influence of any business or political group,” Suthichai said.

Finance: The perfect investment for retirees