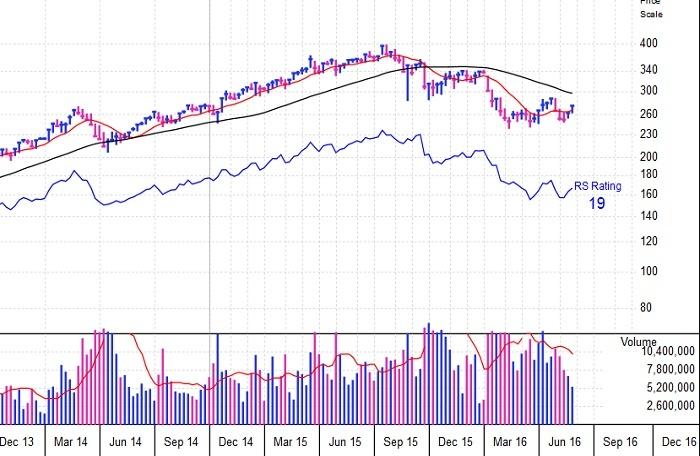 PHUKET: May to October is often a season of choppy sideways action. The old adage, ‘Sell in May and go away,’ already appears to be holding true as over the last three weeks, US markets and global markets have pulled back from overhead resistance levels on their technical charts.

The Nasdaq index in particular is looking bad as tech, semiconductor and biotech stocks largely fail to rally, while the Dow Jones along with many sectors appear to be breaking down.

Since July 2014, the all-important S&P 500 index has largely been in a choppy sideways trading range; roughly between the 1,800 and 2,100 levels, going basically nowhere for investors.

This means the S&P 500 is neither in a bull nor a bear market. So until the index breaks out above the 2,100 level, or plunges back below the 1,800 support level, we can only speculate on the direction the market will go, or whether another recession is lurking around the corner.

Here are several key sector or market indices to watch closely to see which direction the markets and the economy might be heading in.

The PowerShares S&P 500 High Beta ETF (NYSEARCA: SPHB), which indicates whether investors are taking risks by investing in growth stocks, was in a good rally. However, the SPHB has fallen off since late April, indicating investors are not taking risks right now.

The iShares NASDAQ Biotechnology Index ETF (NASDAQ: IBB) briefly rallied only to fall back to a support level. If IBB falls through that support level, it’s not looking good for biotech, and it won’t help the biotech-ladened Nasdaq’s performance.

The SPDR S&P Retail ETF (NYSEARCA:XRT) bottomed in January/February, then rallied, only to hit resistance before getting slaughtered in May. This is not something you want to see on a bull market advance and there is no sign that XRT will breakout again.

Of course, the shift from brick-and-mortar retail to eCommerce – also leveling the playing field for smaller players – is partially to blame for XRT’s performance.

The iShares Dow Jones Transportation Average ETF (NYSEARCA:IYT) also rallied, but that rally has since rolled over and it looks like IYT could continue to head lower.

As with retail, watching the transportation index roll over is not a good thing to see. The i-Shares MSCI Emerging Markets Index ETF (NYSEARCA: EEM) tried to rally.

It did break out above a key level, but recently fell back down below that level.

That’s not a good sign for the global economy nor for developed countries or many large cap stocks that rely on trade with or have a significant presence in emerging markets.

The SPDR STOXX Europe 50 ETFs (NYSEARCA: FEU) performance resembles that of emerging markets. However, Europe faces even more uncertainty with the coming BREXIT vote, the ever-present threat of terrorism and the ongoing refugee crisis that is fueling political resentment against European leaders.

Right now, I am neither bearish nor bullish about the market. However, without positive action in the above key sectors or markets, the overall market will have a hard time moving higher; meaning cash is the safest place to be for risk-adverse investors.

The problem is predicting what will happen as the increasingly unpredictable US presidential elections are still six months away while the FED could come up with yet another quantitative easing to blast the markets.

What we do know for sure is if key sector indices keep breaking down, we could be in for another nasty recession as the overall market, from a technical standpoint, is starting to look more and more like the market in 2007, just before everything crashed the following year.

Keep an open mind as we enter the summer months and watch the price action of the these and the major US markets.

Don Freeman, BSME is president of Freeman Capital Management, a Registered Investment Advisor with the US Securities Exchange Commission (SEC), based in Phuket. He has over 15 years experience working with expatriates, specializing in portfolio management, US tax preparation, financial planning and UK pension transfers. Call for a free portfolio review. Don can be reached at 089-970 5795 or email: freemancapital@gmail.com.

Future of Brexit and British pensions