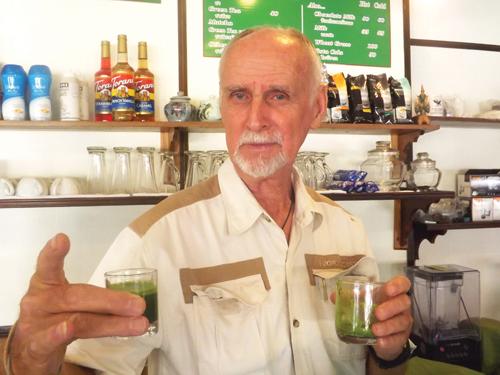 PHUKET: Vitality, curative, nutrient-rich, detoxifying, energy – these are some of the most common connotations associated with the plant, Triticum aestivum, more commonly known as ‘wheatgrass’.

“That’s what I like about it. Maybe it’s to do with my age,” says 68 year-old Frank Gunn, an American expat who has lived in Phuket for the last 22 years.

Frank’s Thai wife, Lumpoon, passed away from cancer less than two years ago. She was only 45 years old. It is in loving memory of her that Frank has named his gem of a coffee shop at the south end of the island “Lumpoon’s Second Cup Free”.

“Wheatgrass is most ideal for [people] 40 years and older. Before that, a healthy body can generally fight off most things,” Frank explains.

Here on Phuket, the herb is mostly associated with detoxification and rehabilitation programs, and isn’t the first thing you might think of when seeking a ‘casual conversation’. That is, up until now.

Frank drinks about three to four shots of wheatgrass weekly, which he believes is the optimal amount for himself.

Although, he does get regular daily wheatgrass customers. “That’s [taking daily shots] for those who’re really concerned about cancer and health.”

It may take some getting used to for first-timers, but the naturally sweet taste grows on you quickly.

As I knock back a complimentary shot with Frank, that sweetness he was talking about is realized: a unique yet familiar grassy sweetness mingling on the tips of my taste buds, before upturning the shot, emptying the glass of pure energy down to my tract.

Home-grown right here on the island, the wheatgrass was propagated at Frank’s hillside home near Nai Harn. Frank went on to reveal that an important factor in ensuring the healthy maturation of his wheatgrass, is the hillside sea breeze he gets, which he says effectively eliminates any threat of mold.

From seed to grass, the wheatgrass is good for two wholesome cuttings. Each tray can supply about two shots of pure green protein and Frank has four to six matured trays on hand at any given time.

His knowledge about this ultimate health supplement goes back decades.

As a Santana electric guitar solo climaxes in the background, Frank recalls his life in Northern California prior to 1993.

Originally from New York, and having lived and worked for a period in the salmon industry of Alaska, Frank went on to open and run a second-hand business for eight years in Santa Rosa, California.

He first came on holiday in Phuket in 1991, before finally moving to the island permanently with his wife Lumpoon, in 1993.

As the highlight of his new Phuket chapter, Frank opened an even more successful second hand business, the first of its kind on the island.

“A little bit of wheatgrass and Santana can go a long way,” he says, as he lowers the sound on the speakers.

“In my town in California, there was a Juice Shack,” he says as he recollects life in the Santa Rosa, just north of San Francisco and Oakland in the 1970s and 1980s.

“But if you look on Google now, there are about twenty of them in that area.

“On the left hand side, there was a coffee bar and on the right a juice bar,” he explains.

“So I always knew about the concept since back then, but ironically ended up learning more about it in Thailand,” he adds as a matter of fact.

After closing his second-hand shop to go into semi-retirement, Frank decided to fill in another ‘first’ niche in Phuket.

“It’s more than just health drinks and good coffee,” he insists, “It’s a good place to hang out in a relaxing atmosphere, have a conversation and exchange some good advice.”

Whether the conversation is about the crossover from eastern to western medicine, innovative ideas or just to reflect on the latest hustle and bustle that is rapidly overcoming our island, Lumpoon’s Second Cup Free is a nice place to stop in – the wheatgrass and coffee besides.

Asked about lessons he learned from his second-hand business, which he could apply to the coffee-shop business, Frank said: “I initially thought that a majority of my customers would be farang (westerners), but that wasn’t the case as 70 % of the people on this island are Thais.”

And, while his offering of premium coffee and naturally sweetened, nutrient rich wheatgrass are popular among health-conscious westerners, Frank is definitely not going to ignore the local Thai market’s potential.

“Just look at the local Amazon coffee shop – it’s full of Thais,” he points out.

Frank is planning to diversify and expand his offering with soups and sandwiches.

Meanwhile, wheatgrass, along with a selection of premium-grade coffees, cappuccinos, slow and fast blended juices, smoothies, and an array of freshly baked and hand prepared goodies are the current offering at “Lumpoon’s Second Cup Free”, located just 10 meters east of Chalong circle, en route to Karon-Kata, on the left hand side (click here for map).