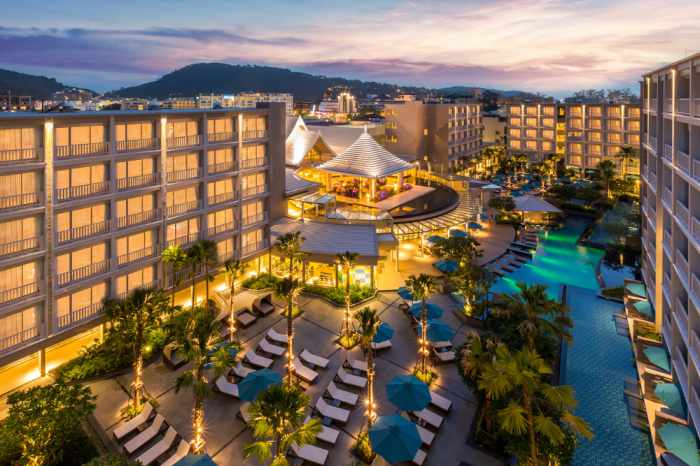 THE ACCOR Group’s latest high-end hotel in the province is aiming to quickly ween itself off the source of its current success, TripAdvisor, and use agent-sourced revenue streams to hit its 2014 goal of gross revenue exceeding 160 million baht.

“Phuket is an agent-based destination. It’s the bread and butter of the business. It would be too risky to rely on online business only,” Sebastien Tronchet, general manager of the Grand Mercure Phuket Patong, told the Phuket Gazette, noting that TripAdvisor, while having a very positive impact on production and results to-date, was a double-edged sword.

The hefty investment comes as the hotel focuses on a battle of attrition against the 10-12 other hotels in Patong that are vying for their multi-sourced, high-end market.

“The owner invested probably a third more than he could have. He wanted to go for real five-star: from mechanical and electrical hardware to beddings, sofa and sound systems in the rooms, sun lounges by the pool, landscape itself, or meeting room facilities.

“When you invest like that, you invest in quality, you invest for the long run. I know some of our colleagues are having issues after having been open for just a few years,” said Mr Tronchet.

The price of necessary renovations so early in a hotel’s establishment can cost it dearly, Mr Tronchet noted.

The hotel, boasting the party town’s only stand-alone and private pool villas, as well as 38 pool-access rooms, was redesigned to better suit the Asian markets, which are well known for avoiding excessive exposure to the sun, by removing the balconies, thus offering them additional space and comfort instead.

“Better to give them more room inside,” said Mr Tronchet.

The Grand Mercure is uniquely positioned to hit the ground running, with Accor Group having nine properties on the island: the Pullman Phuket Arcadia Naithon Beach settled in the luxury bracket and three Novotels, with one in Karon in the works, holding the mid-price range.

In June, with 120 of its 314 units operational before the grand opening, the hotel was running at an average occupancy rate of about 75 per cent, with the hotel being at full capacity in the first weekend of July.

“As a four-and-a-half-star [hotel], we need to be positioning ourselves correctly. The direction to go is the direction the Holiday Inn has been going for years. We need to be able to push the rates up by providing superb service, superb facilities and a great location,” Mr Tronchet said.

“We don’t believe in dropping prices because we’re just opening, or because there is a coup. I’ve been in Thailand for 13 years now and there is always something happening.

“I think we’ll do well because of the service we provide, the facilities we share and location we enjoy… but the key remains the service aspect of it. We are thriving to become one of the best, if not the best hotel in Patong in term of service offered. From the comments we are seeing on TripAdvisor and receiving from guests on a daily basis, we can tell we are going the right direction.”