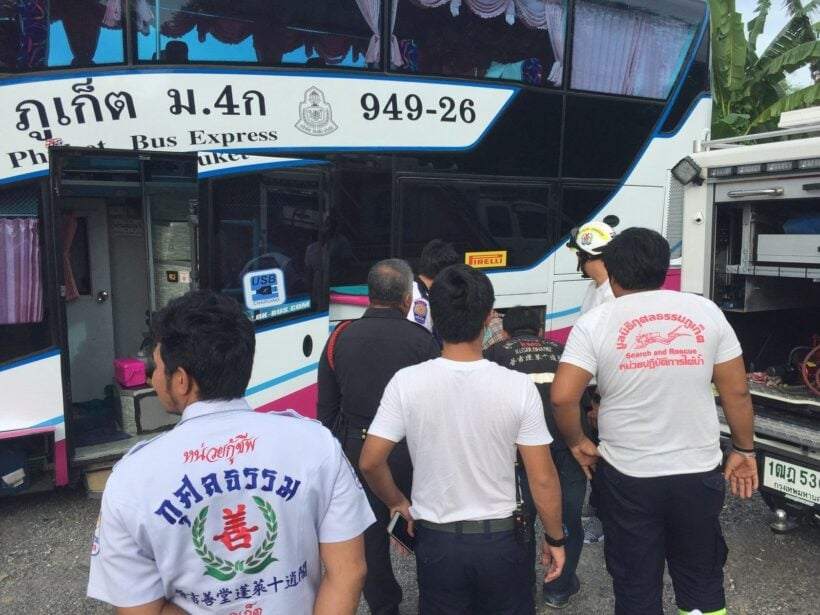 Police and Kusoldarm rescue workers arrived at a car park inside a Shell gas station in Koh Kaew to find a parked Bangkok-Phuket bus. At the left back wheel they found the body of a man who was later identified as 25 year old Nattakit Bamrungrai from Kamphaeng Phet.

The man was found half-sitting next to the wheel. His head was stuck inside the wheel arch. Blood was found coming out from his nose. Rescue workers used a jack to lift the back of the bus to free Mr Nattakit’s body. His remains have been taken to Vachira Hospital in Phuket Town.

Niwat Boonrueang, the main bus diver says, “We were heading from Bangkok to Phuket Bus Terminal 2 in Rassada. We arrived at the bus terminal at 9:30am and dropped off the passengers.”

“After that I parked the bus at the this petrol station. Mr Nattakit, the back-up driver, a bus crew and I were sleeping on the bus to take a rest. At 3:30pm I started the bus engine, preparing to head back to the bus terminal.”

“A warning signal on the dashboard showed that the bus air brakes were malfunctioning. The bus would have been impossible to drive so we needed to fix it. Mr Nattakit got under the bus and inside the wheel arch to fix the air lines. All of a sudden the bus dropped down. Mr Nattakit tried to move but was unable to as the wheel arch had squashed him when the bus dropped.”