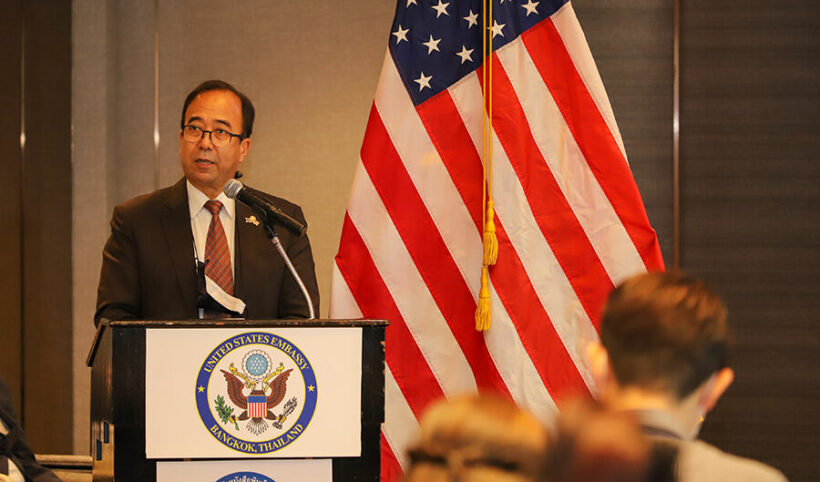 The Chargé d’Affaires at the US Embassy in Bangkok says the United States pledges to support a free press and independent journalism in Thailand. Michael Heath has described a free press as a vital component of democracy and freedom of expression. The Bangkok Post reports that he was addressing reporters who were attending a seminar at the embassy. The event was organised by the Thai Journalists Association.

“This seminar marks the first collaborative effort of its kind between the US embassy and TJA. Like we do across the world, the United States will continue to support a vibrant, free press which keeps us informed, prevents the spread of mis- and dis-information, and serves as a cornerstone of democracy.”

Heath also discussed matters of US foreign policy in the region and collaboration between the US and Thailand.

According to the Bangkok Post report, Heath went on to discuss the issues of peace and security in the region, including dispute resolution, respecting human rights, safeguarding critical supply chains, developing sustainable, transparent economic development, and supporting ASEAN centrality. As part of these efforts, Heath says the US is working on strengthening ties with like-minded countries in the region, including Thailand.

“As Admiral (John) Aquilino, the commander of US Indo-Pacific Command, said during his recent visit to Thailand, the United States is committed to ensuring peace, prosperity, and stability for all countries in the region.”

Heath points out that Thailand has managed to keep its supply chains intact during the Covid-19 pandemic, something many neighbouring nations and other countries around the world struggled to do. The US is currently Thailand’s largest export market.

riclag
Depends on who’s side the owners of the media are on ! There is a power struggle here and its forbidden to talk about it! Its like the symbolic apple from the garden of Eden ! Obey or else
Jason
I wonder what the CCP make of this?
HiuMak
5 hours ago, Thaiger said: The Chargé d’Affaires at the US Embassy in Bangkok says the United States pledges to support a free press and independent journalism in Thailand. Michael Heath has described a free press as a vital component…

JohninDubin
2 hours ago, Buttaxe said: Julian Assange, guilty of committing journalism critical of the US regime - imprisoned and tortured without trial. Nobody does hypocrisy better than the US. Where is the evidence that Assange has been tortured? As for…
LoongFred
Free press shouldn't be biased pro or anti anything. Major USA newspapers such as NYT or Washington post are very left oriented along with MSNBC and CNN. Free but biased.