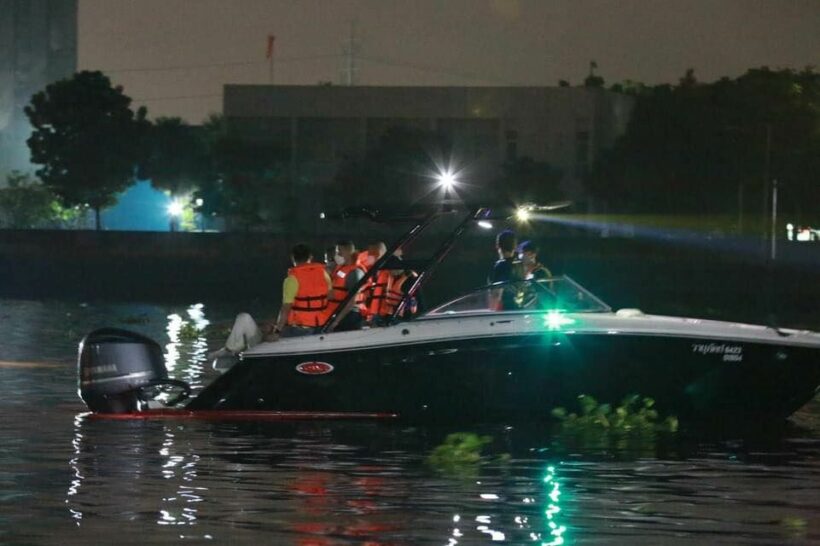 A friend of the Thai actress who was found dead in the Chao Phraya River in Bangkok reenacted the celebrity’s fall off the speedboat today. The friend claims the actress, Nida “Tangmo” Patcharaveerapong, fell in the river while she was trying to pee off the back of the speedboat.

Many people, including Tangmo’s mother, have questioned the claims and suspect foul play. Tangmo was also wearing a swim suit, which would’ve been difficult to take off to pee. Officers now say they will use lie detectors when questioning those who were on the boat with Tangmo.

One of Tangmo’s friends, identified as “Sand,” who has on the boat the night of the incident was asked to reenact the fall at the Piboon Songkram Pier. Reenactments are a typical practice in Thai law enforcement, sometimes attended by a crowd of reporters and locals.

Reports in Thai media say Sand could not remember exactly where her friend had fallen and was nervous about doing a reenactment. Sand wore a life jacket and went onto a speedboat, which was the same model as the one Tangmo had fallen off of. Police drove the boat to a spot under Rama 8 bridge where friends claimed they had been taking photos before the accident happened.

Then, police drove the boat to the spot Sand claimed Tangmo had fallen. Sand reenacted how Tangmo went to the back of the boat and how she held her legs to pee, showing that she fell into the river.

Thai media says the police will question more witnesses as well as three local fishermen who say they saw the boat on the night of the incident. The speedboat’s propeller will also be removed and taken in for a DNA screening. Other evidence found on the boat, including wine bottles, will be further examined.

Fluke
Reported in the UK media as well https://www.thesun.co.uk/news/17793529/nida-patcharaweeraphong-dead-at-37/