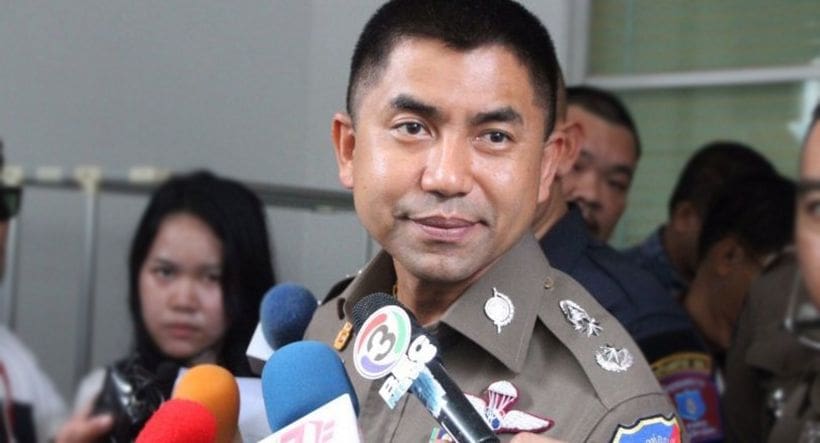 Former Immigration Bureau chief Surachate Hakparn, and confidant of Deputy PM Prawit Wongsuwan, said nothing yesterday about his abrupt transfer to an inactive post at the RTP HQ in Bangkok.

In his first public appearance following the transfer order from the national police chief Pol General Chakthip Chaijinda back to ‘inactive duties”, Surachate reported to work at the Royal Thai Police headquarters just before lunchtime yesterday. He smiled for the media throng but had little to say.

But he answered a phone call from a journalist who wanted to know about the transfer.

“It’s inappropriate for me to talk about it. Let the boss provide the explanation. I don’t feel it’s right for me to talk,” Surachate responded. When asked if he was all right, the officer said there was no problem at all.

Last Friday, the Thai police chief quietly issued an order transferring Surachate out of the top job at the Immigration Bureau to an inactive position at the police operation centre.

Whilst there’s been plenty of speculation, no more details are yet forthcoming.

Surachate’s social media accounts, including Facebook and Instagram, are still offline and have been unavailable since Friday evening. His Facebook account has more than 200,000 followers. Surachate was an active social media user with almost daily posts including photos with him as he criss-crossed the country arresting ‘baddies’ with the daily pack of media and his growing uniformed team in tow.

According to an unconfirmed source, The Nation reports that the national police chief had assigned one of his deputies to investigate Surachate over six counts of wrongdoing.

“This report is untrue,” he said.