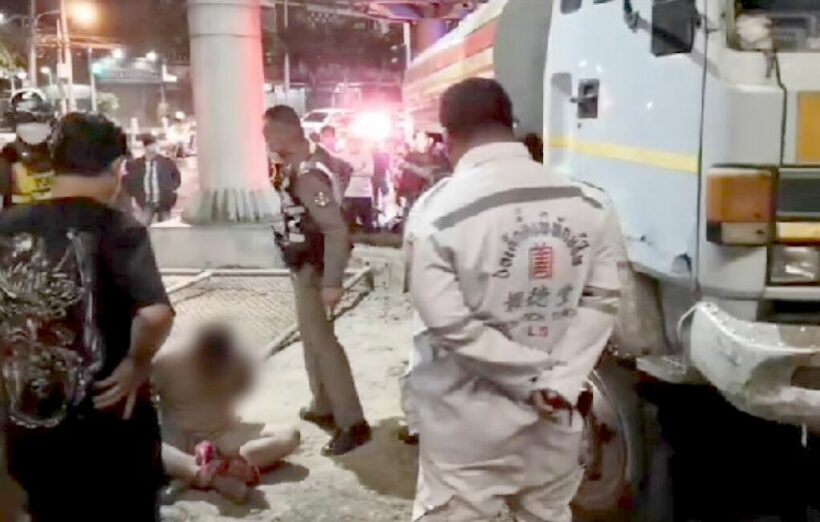 PHOTO: A man on yabba stole an 18-wheeler truck and led police on a wild chase. (via Siam Rath)

Police were led on a long-distance chase through the suburbs of Bangkok when a Thai man who was drunk and high on yabba managed to steal an 18 wheeler truck trailer. The incident started in Samut Sakhon, one of the neighbouring provinces that make up the Greater Bangkok area, and travel 54 kilometres through suburban Bangkok streets.

The man, who the police did not identify, was said to have been drinking alcohol to wash down 5 yabba pills, a popular Thai concoction of methamphetamines and caffeine mixed together, when the incident took place. Police say that the wild ride began yesterday morning at around 3:30 am.

It was at that time that the man, drunk and high on yabba, pulled out a gun and waved it at a 55 year old truck driver who had slowed down his vehicle. The crazed man then jumped onto the truck climbing up the side to attempt to kick the window out.

Showing impressive calm and determination, the truck driver managed to travel for 15 km with the yabba crazed man clinging to the side of the truck until he reached a police booth near the road. He then jumped out of the car and ran to the police to alert them of the danger.

The drugged-up man took advantage of the opportunity to jump in the cab of the 18-wheeler truck and take off for a joyride. He careened so wildly that the trailer that the truck has been hauling became detached and ended up blocking the road.

The Highway Patrol police jumped into their cars to pursue the out-of-control truck, following him down Rama 2 for a very long stretch. Eventually, he went the wrong direction around the roundabout at Wong Wian Yai and then crashed into one of the support pillars under the Thaksin overpass. By the end of the 54-kilometre drug-fueled chase, another 18 wheeler had been damaged as well as a car.

When the police managed to pull the man out of the truck, he was fairly incoherent but told the police of the yabba and alcohol he had consumed. He also said that he threw the gun that he had used to try to commandeer the vehicle at first into the river while leading the police on the car chase, while he claimed that he shot and killed someone before also.

Dedinbed
15 minutes ago, Thaiger said: was said to have been drinking alcohol to wash down 5 yabba pills, a popular Thai concoction of methamphetamines and caffeine mixed together, Should've had a joint on the go as well just for good…

AMc
11 hours ago, Thaiger said: ...a popular Thai concoction of methamphetamines and caffeine mixed together... Meth, cut with caffeine? It must be to add weight/volume :)

AMc
11 hours ago, Dedinbed said: Should've had a joint on the go as well just for good measure .. ...you know, just to take the edge off.