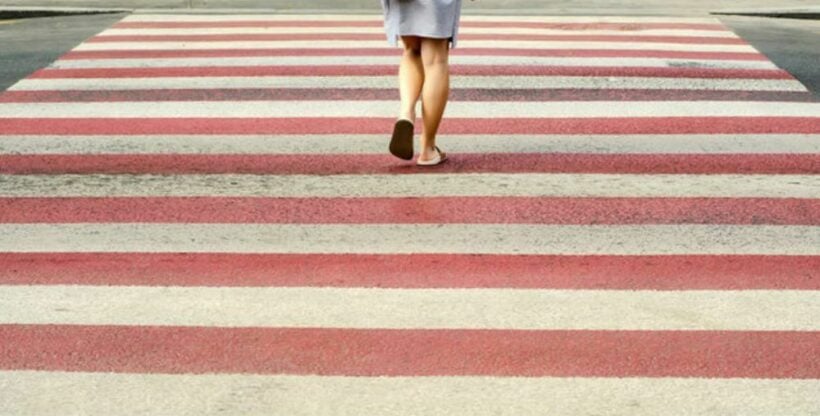 A woman crosses a pedestrian crossing. Photo via depositphotos.

Justice is being called on Thailand’s traffic laws system by the mother of the doctor who was fatally hit by a police officer’s Ducati while walking on a zebra crossing in Bangkok’s Phaya Thai area 2 weeks ago. A petition was sent to a parliamentary law committee yesterday.

The appeal was addressed to the House law committee by the mother of the ophthalmologist, Ratchanee Supawatjariyakul, and her lawyer, who wanted the panel to act as an impartial observer in the case. The mother said that she did not want the suspect cop to be held completely responsible for her daughter’s death because Thailand’s traffic laws and regulations did not offer her daughter protection when crossing the street.

“I don’t want my daughter to die in vain, like in other cases where the victims die without receiving justice… I want her death to be a lesson that will result in changes to traffic laws and attitudes that will improve safety.”

Her lawyer, Natthapon Chinawong, stated that the family has expressed concern over the enforcement of traffic laws, which could lead to more tragedies despite the fact that the criminal was a police officer, and that the case should be pursued by the committee.

The Deputy Bangkok Governor has now spoken with the Metropolitan Police Bureau about the road safety improvements near the Kidney Institute Hospital crossing on Phyathai Road, where the doctor was killed.

The deputy governor said the crossing has been painted red to make it more visible to vehicles, and it will be converted into a pedestrian crossing with traffic signals and cameras to track down violators.

“The BMA plans an additional 100 such pedestrian crossings to replace unsafe zebra crossings, which are expected to be completed by March.”

The possibility of increasing the penalties for failing to stop at crossings to 4,000 baht is being discussed, as is the 10,000 baht reward for whoever sends videos of such behaviours, according to Pol Maj Gen Jirasan Kaewsang-ek from the Metropolitan Police Bureau.

Fanta
25 minutes ago, Guest1 said: Nice words, but why do I think, impartiality is the least, she want? I think that she wants a counterweight to the police, investigating one of their own. He’s been investigated and charged. There would…
Jason
I can only hope this family get both justice and restitution.
Cathat
Have to wonder if the victim had been somebody of lower financial status how well this would have been looked into.
ERIKN
Can't they send Ricky Gervais to Thailand for a few weeks with a truckload of cacti or bricks, whatever (see clip) Ricky Gervais at a Zebra crossing (You Tube) Warning, he does not watch his language, &nbsp;not even a…
ERIKN
It seems to me that more innocent pedestrians or weaker road users in Thailand die as a result of a collision with a motor vehicle than people are killed by violence or by drug crime. (please comment if this…