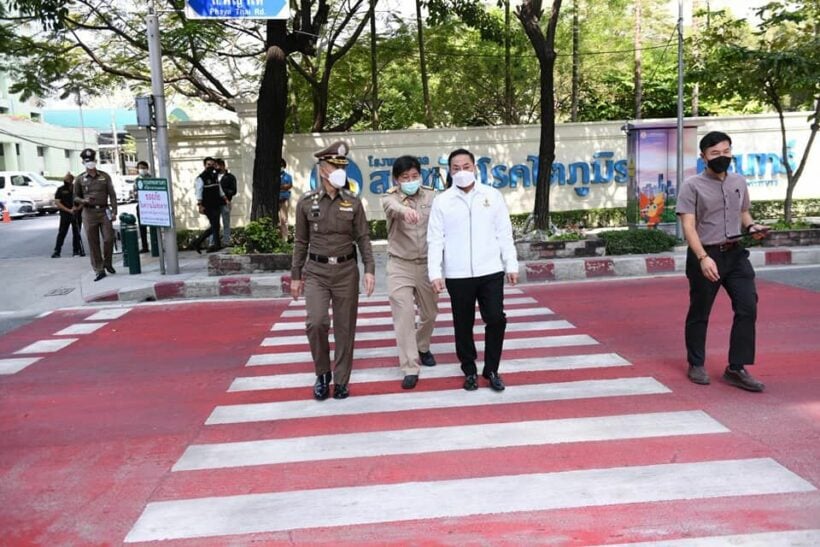 In the aftermath of a fatal accident where a motorbike hit and killed a pedestrian, Bangkok officials plan to install traffic lights and surveillance cameras at 100 zebra crossings. The lights will be installed in two weeks, and the cameras in a month. Out of the city’s 3,280 zebra crossings, only 1,277 have flashing lights warning drivers to slow down before they reach the crossing. Only 226 have push-to-walk buttons, and only 430 are painted red.

Bangkok’s deputy governor said workers are improving cross walks by making more space for people to cross, and painting them so that people will see them more clearly. The Deputy Commissioner of the Metropolitan Police Bureau said the fine for traffic violators will soon go up from a maximum of 1,000 baht to one of 4,000 baht. He urged people to photograph drivers who don’t stop at zebra crossings, and send the photos to police. This way, people can get rewarded from the violators’ fines.

In 2017, Thailand had the highest rate of deaths from road accidents in the world, according to World Atlas. The average road traffic death rate that year was 36.2 per 100,000 population. In a meeting on Tuesday, Deputy PM Prawit vowed to punish traffic violators more harshly, and also start pedestrian safety education in educational institutions for all ages. Teachers will get teaching materials for these programs, he said.