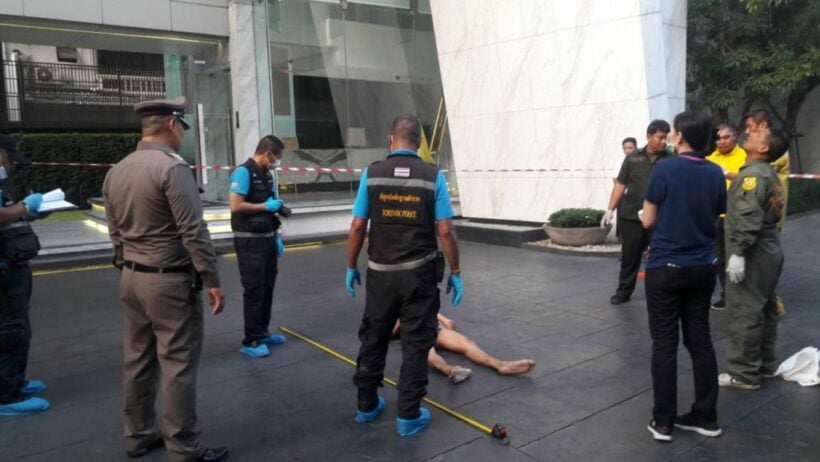 A male doctor working in the “beauty field” and his male friend have been giving confusing testimonies to police today. The pair were apprehended by police on Saturday after their 18 year old guest fell to his death from a balcony at the doctor’s 20th floor condo in Bangkok.

Police speculate the condo appeared to be the scene of a gay-sex tryst at the time of the incident.

A police source at Thong Lor police station say that the two suspects appeared to still be under the influence of crystal methamphetamine, also known as “ice”, when being questioned this morning.

Nine grams of ‘ice’ was seized at the scene.

The two men, both in their 30s and whose names had not been not released, will be brought in front of the Southern Bangkok Criminal Court tomorrow, when police will apply for the first 12 day detention order over an initial charge of possession of an illicit drug, with more charges pending.

Police want to keep them in detention pending the result of an investigation into whether they had caused the death of the teenager, the source added.

The autopsy to determine the time and cause of the teen’s death is expected to take 15 days as he reportedly had a great deal of narcotics in his system, affecting the determination as to whether he had died before or after the fall from the balcony.

The 18 year old victim, whose name has also not yet been released, was found wearing only a G-string.

Thong Lor precinct officers received the report of his death at 3.30pm on Saturday.

A police check of the building’s CCTV recordings found that the victim had entered the condo block with two older men and gone up to the 20th floor with them. This led to their inspection of the room and apprehension of the two older men, who have been insisting that the teenager had become intoxicated and fallen from the balcony, according to the source.