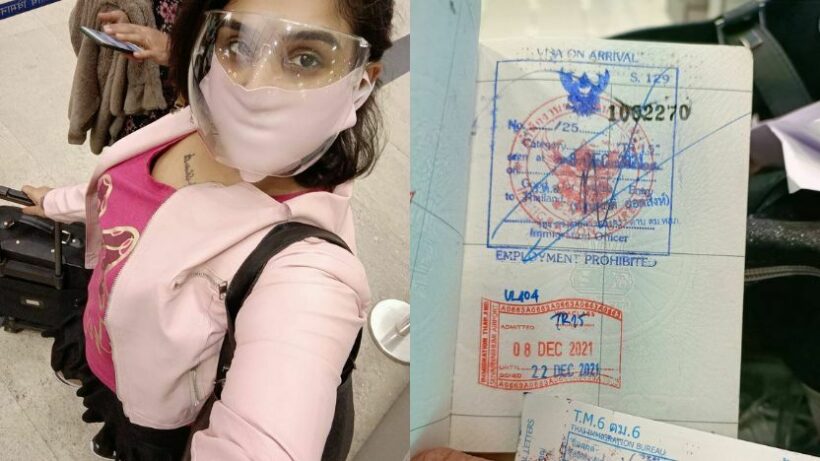 A famous Indian actress says she was almost denied entry to Thailand for apparently not having a document printed out. Travellers are required to obtain a Thailand Pass QR code to present at the airport upon arrival, but the actress, Vanitha Vijayakumar, says she needed to have a document printed out for her Visa on Arrival. The 41 year old actress was eventually allowed to enter the country, but apparently it wasn’t easy.

Vanitha made a post on Twitter saying she was stuck at Bangkok’s Suvarnabhumi International Airport for hours because she didn’t have a document printed out for her visa. She says she was even told to fly back to India to print out the document.

@srilankanairlinesofficial scam…stuck in airport immigration past 3 hours…Bangkok airport is deserted…no duty free no food no coffee..no printer in the whole of Bangkok #suvarnabhoomiairport. No printer to take print for visa on arrival for eligible travelers… Bangkok is always visa on arrival and now they have a policy for certificate of entry called Thailand Pass which I got already from India….can’t enter the country because no printer

@srilankanairlinesofficial so rude and unethical doesn’t care after taking exorbitant ticket fares…the manager is asking me to buy a new ticket and go back to India to get a print out.

After four hours of back and forth with airline staff and management, the actress says she was finally allowed to enter the country. She wrote another Tweet saying she appreciates the assistance and kindness of the immigration officers and the airport passenger service.

Grauwulf
10 hours ago, atiger said: Thai immigration police use this method to pressure foreigners into paying tea money to enter Thailand and approve visas otherwise they make you wait for as long as possible giving you more time to think…

Donald
20 hours ago, nobusinessofurs said: If your planning to come here Don't, if your here don't let the door hit you on the way out. It seems that some here have become the most outspoken defenders of the Thai "way"…
Easterneye
Famous ? So famous where ? In her local rice paddy Looks like yet another tatted up instagramskank Should have sent her back , but yet again , rules are rules in Thailand , er cough , unless you can…

Shark
If the word almost was missing from this article I could indeed consider this news, now by any means... piece of trash gets allowed in-to the country has zero news value.

Fluke
6 minutes ago, Shark said: If the word almost was missing from this article I could indeed consider this news, now by any means... piece of trash gets allowed in-to the country has zero news value. Could be that she…

57 migrants arrested in Kanchanaburi for allegedly crossing the border illegally