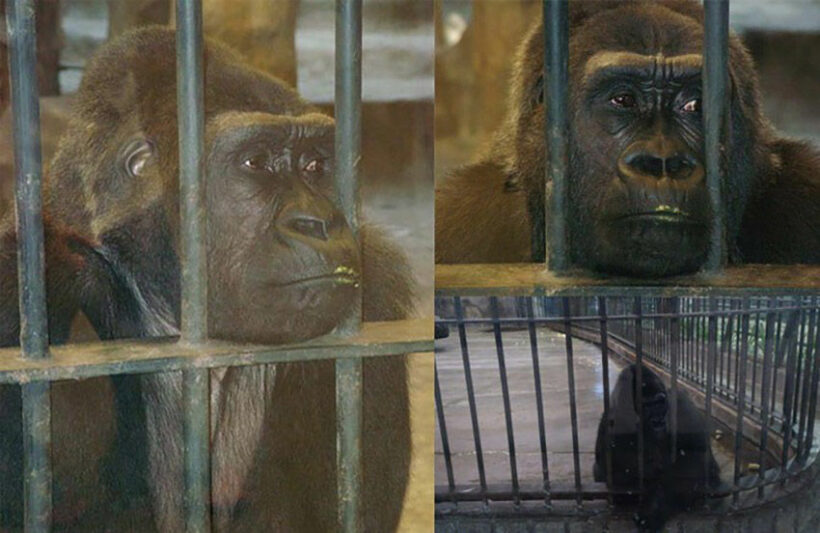 US singer Cher has taken to Twitter to expose the plight of a Thai gorilla known as Bua Noi, who has lived above a shopping mall for 30 years. With her mate having died several years ago, she is Thailand’s only gorilla. Cher’s mission to rehome Bua Noi comes just after her rescue of 36 year old Kaavan in Pakistan, dubbed “the world’s loneliest elephant.” The singer’s favourite charity Free the Wild managed to relocate Kaavan to a Cambodian sanctuary after he spent years living alone, in allegedly ‘less-than-satisfactory’ conditions, in a zoo in Islamabad.

With Kaavan safely taken care of, the plight of Bua Noi, living in Pata Zoo, on the top floor of a Bangkok shop mall, has captured the singer’s attention. The zoo has been in operation since the late 1980s and is home to various species of monkey, reptiles and birds, over 2 floors. It has been condemned by animal welfare activists and others as completely unfit for purpose.

Below are excerpts from some of the Tripadvisor reviews for the facility.

“Rooftop of aninal cruelty and hell! horrific cruel and should be shut down!!! The poor gorilla is all by herself and desperate for affection and should be with her own kind…. don’t get me started on the rest of these poor creatures!”

“Horrible. Please send the animals to a conservation group. They are unhappy and starving. The pata mall is mostly abandoned and desolate, everyone forgets there is a zoo there and the animals are suffering.”

Now, a tweet from Cher, in which she pleads for help in relocating Bua Noi, has made news around the world. 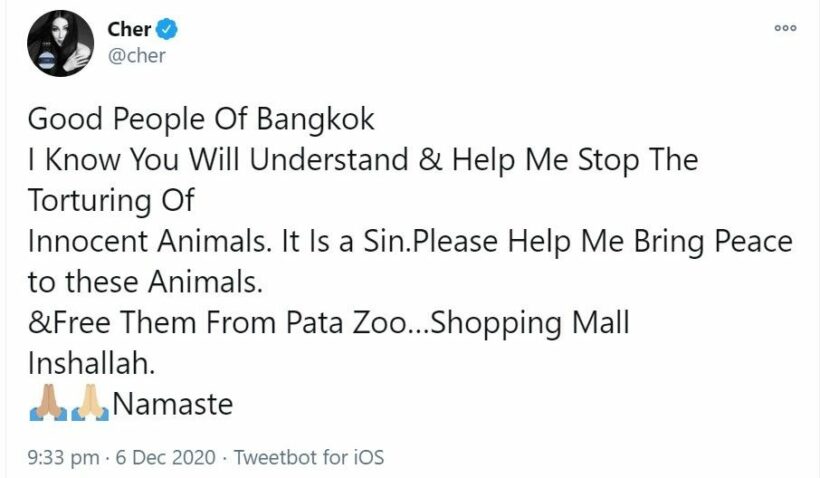 Mark Cowne from Free the Wild says the charity is in contact with the Thai government in hopes of being able to rehome Bua Noi, as well as a number of other animals at Pata Zoo, including an orangutan and her baby.

“None of these animals appear to be being properly cared for and the reports we have received refer to the zoo as decrepit and overrun with rats and cockroaches. No matter how much ‘care and attention’ is lavished on these animals by their owners and keepers, just by keeping them in such confines and conditions is purgatory for them in terms of their well-being and mental health. These primates are the closest living relatives to mankind and, when we wish to severely punish another of our own species, we put them into solitary confinement. The worst possible punishment for a human. And, even then, it is for a limited period. But these wild, wonderful, charismatic animals are in solitary confinement for life. In a zoo. On top of a shopping mall. That is far removed from the lowlands of the Congo.”

For its part, the government has responded to the allegations, with Varawut Silpa-Archa, Minister for Natural Resources and the Environment, refuting the suggestion that the animals have been forgotten about.

“Please be informed that the Ministry of Natural Resources and Environment has never forgotten or ignored Bua Noi. I, myself as minister in charge of wildlife conservation, have given instruction to the relevant agencies in order to find the best solution for a better life of Bua Noi.”

Meanwhile, a spokesman for the Wildlife Conservation Office, part of the Department of National Parks, Wildlife and Plant Conservation, says the zoo is not currently in violation of any rules by having the gorilla there, adding that the owners have already been advised in the past to improve conditions. Officials say the deadline for the zoo to apply for an extension to its permit is approaching and, if the necessary improvements are not made, the extension will be postponed.

However, in an interview with the UK’s Sky News, zoo owner Kanit Sermsirimongkol has dismissed the accusations against the facility, insisting all the animals are well looked after.