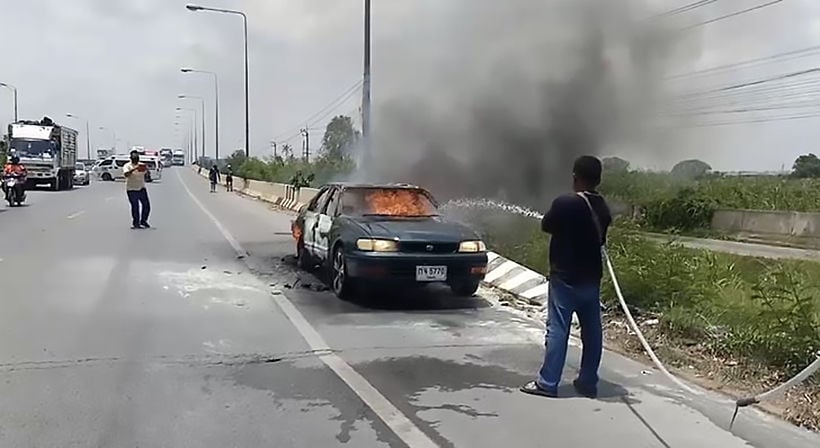 A couple in Nonthaburi province, just north of Bangkok, bought a used car for 22,000 baht, not expecting that would go up in flames before they got it home. The couple ran for their lives as the car was incinerated on the roadside. The Pak Kret Police Station was notified at 12:30 on Thursday of a car on fire on road 345 near Pak Kret 2 Hospital. The local fire brigade were notified and rushed to the scene of the incident.

Authorities found the Green Toyota Corona with a Roi Et license plate parked on the road, engulfed in flames that continued to engulf the car. Citizens, including 2 cement truck drivers, stopped and helped find water to put out the fire. Firefighters arrived and together the team were able to control the fire after 30 minutes.

The husband and wife said they’d just purchased the car from a secondhand car tent in Pak Kret, not far from where the car was now sitting. The couple were planning to drive it to their home in the western Kanchanaburi province, near the Burmese border. They bought the car and had only just left the car tent. Suddenly smoke started began pouring out of the engine. They quickly stopped the car and ran away, fearing an explosion. They made the right decision, as it quickly burst into flames.