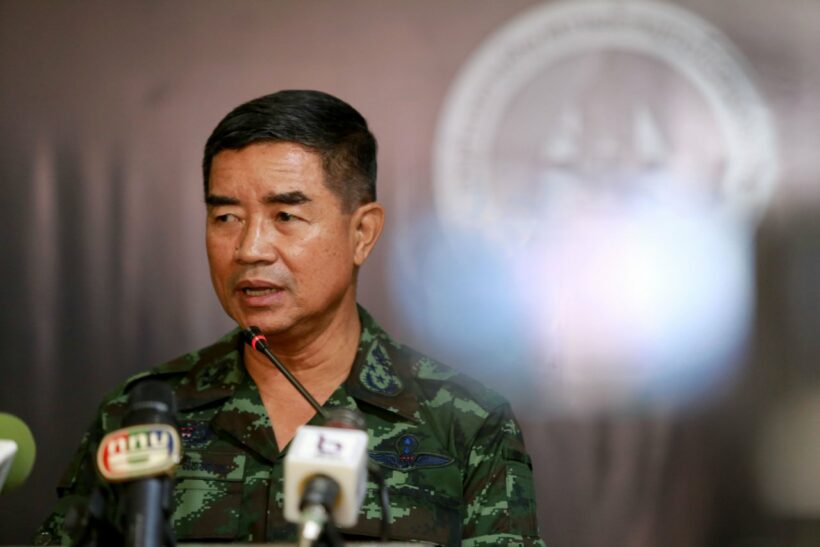 Breaking News from The Nation

Security officials have detected signs on social media of intent to provoke a public disturbance during the week of the funeral for the late King Bhumibol Adulyadej, and have issued warnings to those concerned about such an attempt.

Army Chief General Chalermchai Sitthisart said on Monday that those seeking to provoke a public disturbance were in fact the same group of people who were accused of having violated the Kingdom’s lese majeste law, and who had subsequently fled the country.

He stressed that security officers were on full alert, and there should be nothing to worry about as people would also help them by keeping their eyes open for anyone with ill intent.

The funeral of the late monarch, he added, was a most significant event for all Thais, and officers would continue to take care of security issues, especially in and around the funeral compound.

Police officers will be the prime force tasked with taking care of security matters around the compound, while the military will support them with intelligence, Chalermchai said, adding that they would focus their suppression effort primarily on certain known targets.

Keep in contact with The Thaiger by following our Facebook page.
Never miss out on future posts by following The Thaiger.
News Categories:NewsThailand
Related Topics:
1 Comment

More kids sailing than ever at the Phuket Dinghy Series 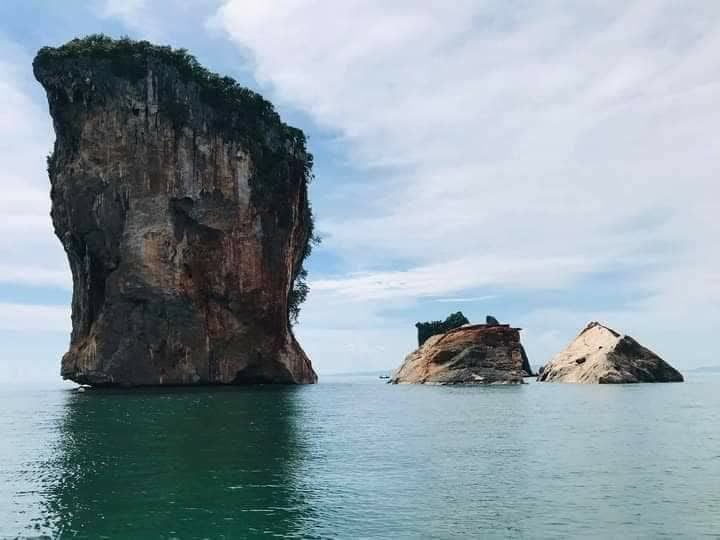 A popular dive site at Koh Phi Phi National Park will be closed off for the next 2 years after 30,000 tonnes of rock broke off of a karst island, falling into sea and onto a coral reef.

Koh Mae Urai is karst formation between Koh Phi Phi and the Krabi mainland. A large chunk of the rock formation collapsed last week and broke into 2 pieces, damaging the coral reef at a popular dive site known for its 2 underwater tunnels lined with soft and hard corals.

Chief of the national park, Prayoon Phongphan, says 300 square metres of the reef is damaged. A project is in the works to help recover the reef.

“These include staghorn coral, big star corals, ring corals, floral corals and brain corals, among others.”

The area was recently inspected by divers and national park officers as well as geologists from the Ministry of Natural Resources and Environment. Prayoon says they’ll close off the area for the next 2 years.

“The area where the island collapsed will be sealed off for 2 years for the safety of local fishermen and tourists. It is possible that more of the island will break off… Officials have already installed buoys and red flags to make sure no one enters the area. Park officers will also regularly patrol the area.” 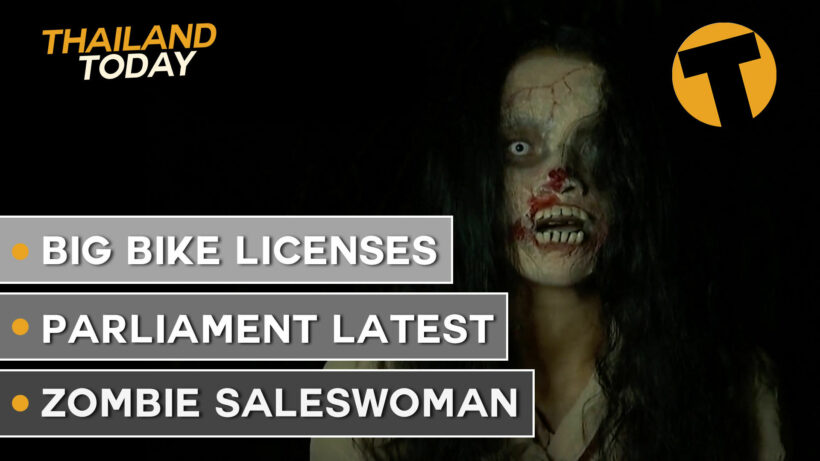 Daily TV news from The Thaiger, the most watched English-language news service in the Land of Smiles, and hosted by Tim Newton.

From next February, motorbike riders in Thailand will be required to pass a separate driving test and training session if they wish to receive a licence for a “big bike”.

The regulation has been formalised in a bid to cut road traffic accidents which are predominantly motorbikes (about 75%) and predominantly male. From February 19, anyone with a bike over 400cc will need to attend additional training sessions and take a test in order to comply with the law.

What has not been made clear at this stage is whether foreign riders in possession of a big bike licence from their home country will also be required to take the test.

The latest word on Thai politics and the protests and the Thai PM has made it clear he will not resign, saying he has no intention of “abandoning the country during a crisis”.

Addressing Parliament, Prayut Chan-o-cha pointed to the current problems facing Thailand, including the political divide in society, the crisis brought on by the slowdown of the economy, and the dangers of a Covid-19 resurgence. He said…

“You should think back to the political rallies in 2006 and 2014, when the ones in power also did not resign. I refuse to comply with the proposals that do not represent the needs of the majority of the people and will not run away from problems or abandon the country during a crisis.

He went on to say…

“The political rallies could undermine the confidence in our economy, but what worries me is that it could cause a rift in Thai society.

Meanwhile an opposition party MP has slashed his arm in front of officials in Parliament, in protest at the treatment of the country’s political activists. Visan Techatirawat, a party member of the opposition Pheu Thai Party, says the gesture was his own personal protest to oppose the government’s action against peaceful protesters at a rally in the capital on October 17.

Visan slashed his left hand and arm 3 times on the second day of the joint parliamentary debate aimed at finding a way out of the current political impasse.

Officials are reviewing the use of a Samut Prakan hotel, just outside Bangkok, as an ASQ quarantine facility, after 3 foreign nationals staying there tested positive for Covid-19. The first was a 57 year old woman who developed symptoms of the virus after she had completed 14 days’ quarantine and had returned to her home on the island of Koh Samui.

Yesterday, 2 more foreigners staying at the same hotel also tested positive. All 3 are now receiving hospital treatment, but officials are still not sure how they became infected or if their cases are even linked. He added that the hotel, the Siam Mandarina, may not meet the required standard of an alternative state quarantine facility.

Still need to extend your visa? You have until Halloween, October 31. With the visa amnesty deadline approaching, Thai Immigration Bureau is reminding foreigners to get their visa in order by the end of this month.

Late applicants will be fined.

No matter when your visa is extended, as long as it’s before the deadline of October 31, it will go into effect on November 1 and allow a 60 day stay.

Since the recent amnesty period was put in place a few days after the initial September 26 deadline, those who paid 1,900 baht for 30 day visa extensions last month are now allowed to stay until November 30, but they need to go to immigration to get a stamp with the new expiration date.

If you’re not sure about your visa status, you should go to your local immigration office or speak to a qualified visa agent.

Just briefly, 13 new Covid-19 cases have been detected in Thai quarantine over the past 24 hours, including 4 Thai students, according to the Centre for Covid-19 Situation Administration.

The total number of confirmed Covid-19 cases in Thailand is at 3,759 with 3,561 recoveries and 59 deaths. 139 people are currently receiving medical treatment for the coronavirus.

And it might not work in many countries but it’s sure working well for this enterprising Thai woman. The zombie saleswoman is selling dead people’s clothes online.

32 year old Kanittha sells the clothes of deceased people on a Facebook live stream while dressed as “the living dead”. She gives a story behind every pieces of clothing, explaining how each person died. Perhaps it would be a real business kill in most countries, but not in Thailand where the spirit world and superstition are just as real to some Thais as the world of the living.

Traditionally in Thailand, clothes of the deceased are burned.

Flooding is being reported in at least 6 provinces, with warnings of heavy rains and flash-flooding up to Friday. Typhoon Molave has reached the Vietnamese coast, just south of Da Nang, and is slowly moving westwards towards Laos and then north eastern Thailand as it weakens.

It is the fourth tropical storm to batter the southeast Asian country since 11 October and the ninth since the start of the year. 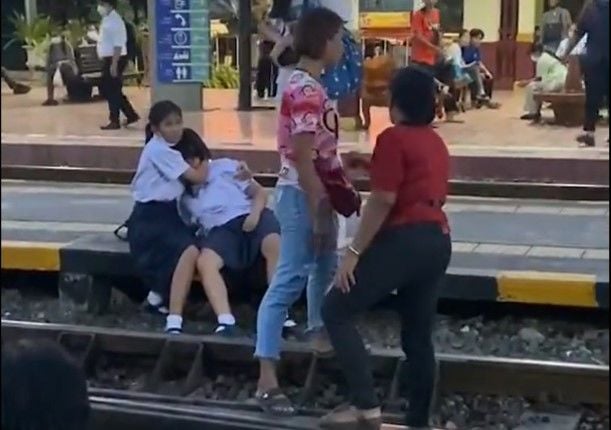