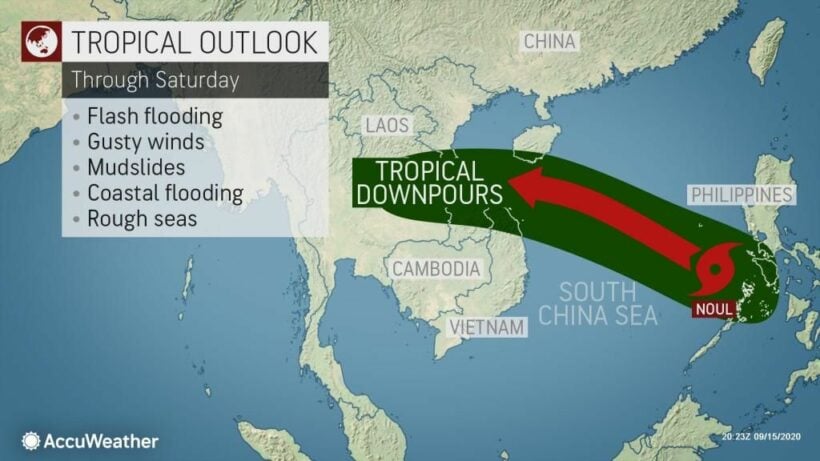 The Thai Meteorological Department has announced this morning that heavy to very heavy rain is slated to grace the skies this weekend, September 18-20, all across the Kingdom (there goes the weekend!) . The forecast comes after a category 2 tropical depression over the middle of the South China Sea officially ‘strengthened’ around 1 am this morning to a category 3 tropical storm named ‘Noul’.

The storm is reportedly travelling in a west-northwest direction at a speed of 15 kms per hour, with sustained winds of 65 kms per hour and is expected to make landfall over middle Vietnam, and then pounds its path towards northeast Thailand by September 18.

The southwest monsoon across the Andaman Sea and the Gulf of Thailand is also set to intensify, bringing more rain and adding to the torrential downpours nationwide, particularly to southern provinces. Strong winds are forecasted to accompany the rain and will reportedly hit the Northeast, then the North, the Central, the East and the South.
It is the wet season after all, so rain can usually be expected at this time of the year. More information about the annual monsoon HERE.
Wind waves are expected to be around 2-3 metres in the Andaman Sea, around 2 metres high in the Gulf of Thailand, reaching more than 3 metres during thundershowers.

The meteorological department has advised all vessels to remain shored during this time.