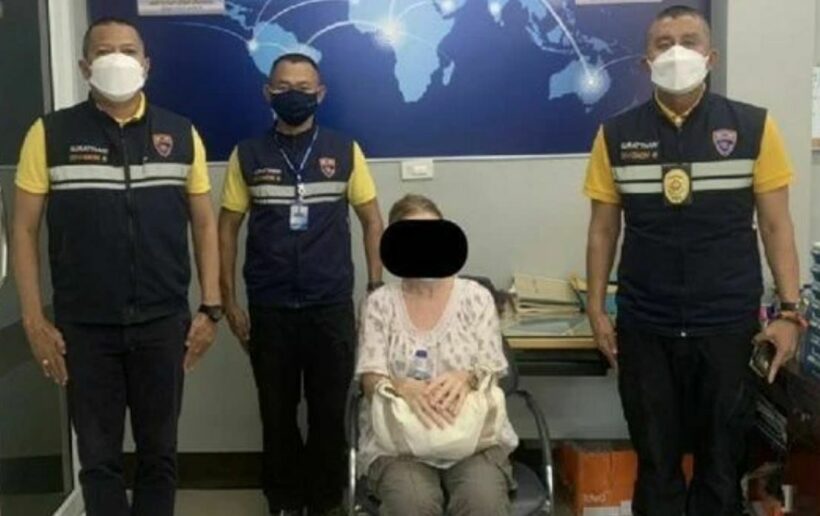 PHOTO: a Hungarian woman was caught in Koh Samui on a 10-year overstay. (via mgronline)

A Hungarian woman was arrested in Koh Samui by Surat Thani Immigration Police for a visa overstay… of more than 4,000 days. The woman admitted to having travelled to Thailand in November of 2009 on a tourist visa and then stayed with her husband without ever bothering to apply for any visa or extension.

The woman’s visa expired at the end of February in 2010 and she stayed illegally for more than 10 years in Thailand. The Thaiger is not identifying her details other than to say she is a Hungarian national, though Thai media identified her by name and passport number.

She appears to have been living in Bophut on the island of Koh Samui and had lived with her husband until his death at the beginning of this month.

The woman had been out and about around the island when police officers asked to check her documents on the road near Bangrak Beach. No details have been made available yet about what prompted the police officers to stop the woman. When her 10-year overstay was discovered police took the woman into custody and brought her to the Bophut police station.

Current laws for overstays in Thailand state that, for an overstay of 10 years, the woman would be fined 20,000 baht and given a 10-year ban on entering Thailand again. While punishment is generally less severe for people who turn themselves in versus those caught on an overstay, the overstay by the Hungarian woman is so long that maximum penalties would apply either way.

Those who surrender for an overstay of fewer than 5 years face a 5-year ban, while anyone caught (not surrendering) with an overstay of more than 1 year face the full 10-year ban.

Police involved in her apprehension said they were acting in accordance with the law to prevent illegal immigration and extended residence in the country without permission. They urge people to report offenders to Surat Thani’s Immigration hotline.

For more information on the Thailand Elite Visa, CLICK HERE

DiJoDavO
4 hours ago, Soidog said: Why can’t she go “back home”? You can leave and go to Europe whenever you want.  As you see in my posts about Covid, she should just be able to be sent back home yes.…
Griff1315
I knew a South African guy a few years back, I had no idea he was on overstay until I get a call from his girl telling me had been arrested and asking if I could help.  He was taken…
Kozze
They would better take an example of this in Europe where being illegal is hip and illegals can do everything they want to and get away with all crimes they commit , supported by left scum organizations and authority’s .…

Soidog
5 hours ago, DiJoDavO said: As you see in my posts about Covid, she should just be able to be sent back home yes. No one should overstay their visa. But during the pandemic all I hear is no travel…