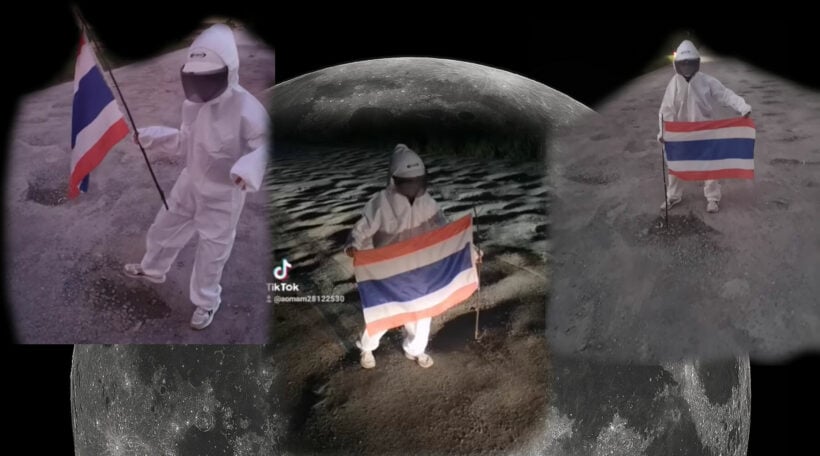 PHOTO: A Khon Kaen road was shown to have potholes like the moon. (via Aomam Chaluayjit Wansueb/Facebook)

A Khon Kaen woman found a creative way to get the necessary attention from government officials to finally repair the terrible potholes on her road. Anyone who has driven around Thailand enough has encountered a road so rough and full of potholes that it resembles the surface of the moon. And if anyone wants to fake another moon landing, Khon Kaen has just the location for you.

But Aomam Chaluayjit Wansueb had enough of it in her neighborhood and decided to dress as an astronaut on the moon and bound around the lunar road scape in videos that went viral this week.

The 33 year old resident of Huai Jod subdistrict shot a series of photos and videos where she donned a white hazmat suit, helmet and face shield and grabbed a Thai flag on a pole and did slow-motion space strides around the incredibly bumpy road that so resembles the moon.

She captioned videos with phrases like “Breaking news: A new planet discovered on Ban Huai Jod-Nong No Road, Huai Jod subdistrict, Kranuan district,” and hinted not-so-subtly that they are looking for the proper authorities to help.

The videos quickly went viral as she asked people to share her posts for the sake of her community who suffer driving that crater-filled road each day. The creative poster said there was upwards of 3 kilometres of road like this in her neighbourhood and she called on the local government to take action, chastising them for their failure to fix the severely damaged road.

The viral clip made headlines in Thai language news outlets before breaking out to some English publications and social media and even made its way on television news coverage. Not surprisingly, the attention turned the heads of government workers responsible for the care and maintenance of the roads in her area, and after Khon Kaen Governor Somsak Jungtrakul saw the video, he put out the order to get the moon-like road repaired finally.

Graham
Just goes to show, if you shame them enough they will get off their a**es and do something, shamed into doing the job they are well paid to do, shocking really but TIT. 555

AussieBob
What is seriously annoying about this issue, is that there are literally millions of 'public servants' in Thailand still getting paid, while the majority of Thais are out of work and seriously struggling.  There are about 2 million public servants…

gummy
One small step for that lady, but a giant leap for Khon Kaen road repairers 😉
Lawyers_Guns_and_Money
Photos don't look much different than the ones used to fake the moon landing. Kubrick would be proud.

Guest1
18 hours ago, DiJoDavO said: This is a great way of trying to get attention to solve problems. Let this be an example for everyone. Even though there are problems, get attention and have a bit fun doing it, instead…