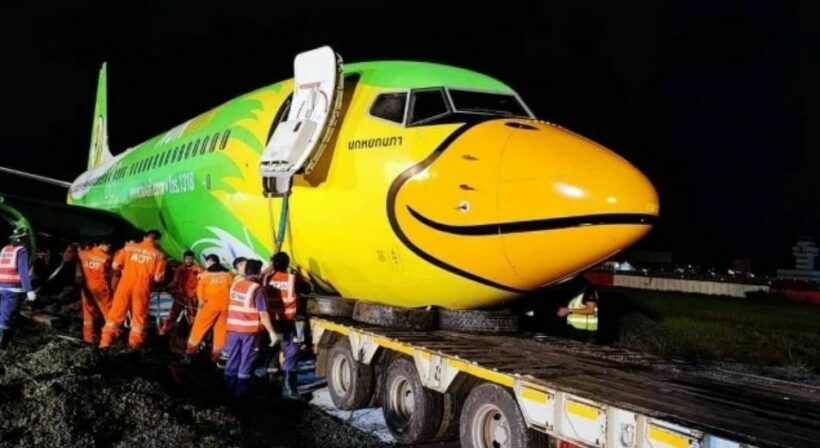 The Nok Air plane which skidded off Chiang Rai Airport’s runway during landing on Saturday night was finally lifted out of the mud and removed at 4am today, but the airport will remain closed until August 6 due to poor safety standards.

The incident sparked a safety inspection by the Civil Aviation Authority of Thailand (CAAT), which found that the airport does not meet the safety standards of the CAAT in several areas.

Once Mae Fah Luang Chiang Rai Airport can prove to the CAAT that the necessary repairs have been made and meet safety standards, the airport will be allowed to resume normal operations. The airport plans to reopen on August 6, once it completes the following demands…

Although the incident happened on Saturday night (July 30), the Boeing 737-800 was not removed until this morning (August 4). At first, the airport said it would take three days to remove the plane due to a crane being required to lift it out of the mud. However, a thunderstorm on Tuesday night (August 2) hindered the progress of the operation, said the airport.

The CAAT has asked the Nok Air pilots flying the runaway plane to provide information that will be analysed to figure out the true cause of the incident, which was classed as “severe” by the CAAT.

Nok Air is still under fire from disgruntled passengers who spent over an hour in the cabin with no lights or air conditioning after the accident occurred. The shoddy evacuation has been heavily criticised as dangerous, with netizens expressing that an aircraft should be evacuated in no longer than 90 seconds in such a situation – in case the aircraft sets on fire or blows up.