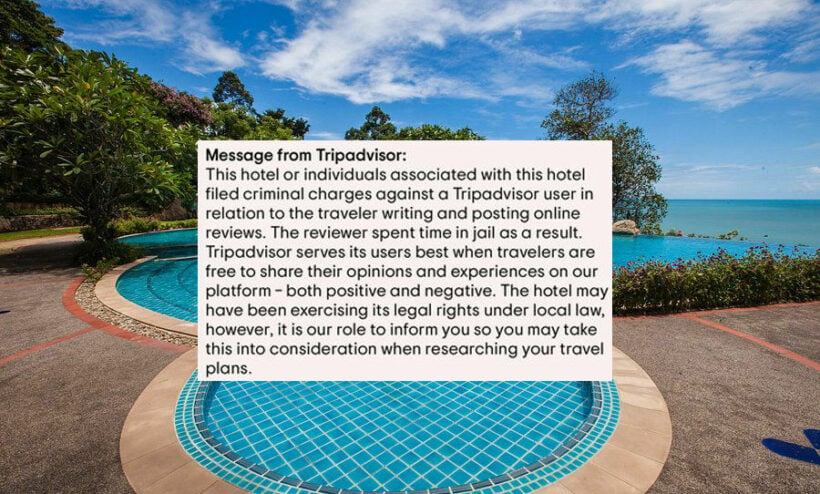 Be careful if you want to trash a Thai hotel in the land of fragile egos who use the handy tools of eager lawyers and draconian libel laws. Now TripAdvisor, the review website everyone loves to hate, is warning potential travellers to a particular Thai hotel that they could face severe consequences for sharing negative opinions about their experience.

One visitor, Wesley Barnes from the US, was arrested after he waxed lyrical in his opinions about poor service at the particular establishment. Mr. Barnes was freed and eventually apologised in a settlement between him and the hotel. But TripAdvisor slapped this notice on the hotel’s listing… 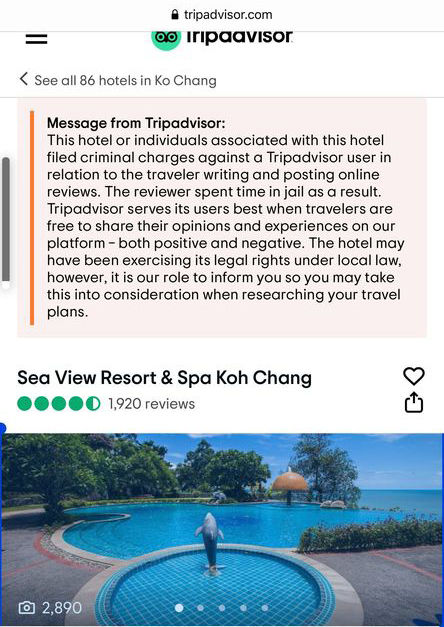 Just in case you are warming up your fingers for a quick critique, this listing for the Sea View Resort & Spa in Koh Chang now includes a blatant warning.

“The reviewer spent time in jail as a result.”

Management at the hotel made an official complaint to the local police about the critique at the time. Mr. Barnes’ review strayed somewhat from the usual commentary about dirty bathrooms and cold soup to include “modern day slavery”. The resort’s management claimed that it had first tried to reach Mr. Barnes directly to “resolve the matter”, but took legal action because other reviews had been posted across different platforms, a few weeks apart.

At the time he was facing 2 years in a Thai prison after posting his negative online reviews about the Sea View Resort & Spa. Barnes, who works in Thailand, reported that he was arrested at the time by immigration police and that his passport had been confiscated until the matter was resolved.

Mr. Barnes stayed at the resort in June and had a disagreement with restaurant staff who tried to charge a corkage fee for alcohol he had brought on to the premises. He also added later that he felt the hotel’s management “were aggressive”.

Koh Chang police confirmed that an official complaint had been filed and that Mr. Barnes was accused of causing “damage to the reputation of the hotel”, and of bickering with staff about the corkage fee.

After weeks of media attention, local and international, and 1000s of online comments over the matter, the resort agreed to drop the police complaint if Mr. Barnes apologised and could convinced TripAdvisor not to display a “red badge” on the hotel’s TripAdvisor listing, which “could harm its business”.

The hotel’s use of Thailand’s notoriously tough libel and defamation laws rattled TripAdvisor, which now displays a clear warning about negative reviews that could land you in jail as a result of criminal charges filed by the hotel’s management.

“The hotel may have been exercising its legal rights under local law, however, it is our role to inform you so you may take this into consideration when researching your travel plans.”

The hotel has issued a statement accusing Tripadvisor of breaking its part of the settlement that was reached with Wesley Barnes.

“We fail to understand how Tripadvisor going back on their word, and not being impartial, is helpful to any of the parties involved in this case,” the resort’s manage responded in a statement to the NY Times.

By the way, if you want to visit the Sea View Resort and Spa Koh Chang in the middle of December, we randomly chose a date on Bookings.com and found a room for 2,900 baht a night. Have a great time, but don’t argue about the corkage!