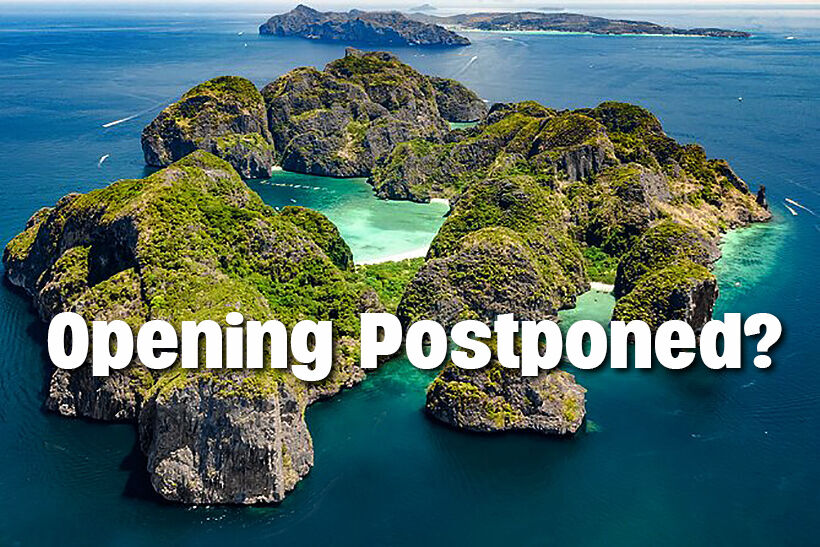 Maya Bay, on Koh Phi Phi Leh, in between Krabi and Phuket, was slated for a reopening on January 1. But now there’s a building swell of local support to keep the famous Bay closed, for a while anyway. A Line group used by the Marine National Park, along with tour operators and other stakeholders, has revealed a groundswell of support to extend the closure of the picturesque bay, made famous in the 2000 film, “The Beach”. Of note, the support has come from the local Thai stakeholders and tour operators who are committed to long-term protection of the popular natural asset.

(Watch the special video reports from The Thaiger about the reopening of Maya Bay, below)

The iconic natural cove of limestone karsts, turquoise waters and THAT beach was one of Thailand’s most popular attractions for a decade with up to 6,000 visitors everyday in the lead up to the closure of the tourist attraction in July 2018. The huge amount of visiting boats, the onsite refuelling, boat anchors and people clambering onto the sandy shores was slowly destroying the local ecosystem.

So they closed it.

“The Beach” was a 2000 film starring Leonardo DiCaprio (and a great book), set in Thailand with the ‘beach’ played by Maya Bay. Maya Bay was poised to reopen to tourists on January 1, 2022. But now local operators, and national park officials, are concerned that the Bay may not be ready for visitors for a reopening only 4 weeks away.

A new concrete and steel landing pier, on the back side of Koh Phi Phi Leh, has been constructed, but the infrastructure was to have floating plastic pontoons for the tour boats to tie up. As ot his date, they have not arrived. There are also concerns exactly how these new arrival platforms will act if the seas aren’t perfectly flat. From the arrival pier there is a 10 minute trek from the back of the island onto the Maya Bay beach along a boardwalk which keeps the tourists off the actual island, until they get to the beach. The proposal to reopen the bay to tourists was also going to limit boat and passenger numbers daily, and prevent boats entering the actual bay.

At this stage no official announcements have been made but with only 4 weeks to go, and indecision in the wind, the popular ‘beach’ may remain quiet beyond the proposed January 1 date. Watch this space.

LoongFred
16 hours ago, gummy said: Phuket also was a pretty place when I first visited it 1987, now look at it overrun with Thai scammers and foreign stowaways well prior to covid, but the the Phuket mafia are busting a…
Prosaap
But this is again a example of the great thai planing it dos not mater what thai official make the planing they just cant look ahead
Jason
This area saw a welcome rest from tourism which has begun the healing of it. There's too extremes to avoid. One, it is overrun by tourists again or two, it becomes a destination only elites can enter. Somewhere in the…

TheDirtyDurian
6 hours ago, LoongFred said: I must have preceeded you by 15 years. It was just a sleepy place and the beaches were deserted. Great sea food a "new lucky" if I remember the name. The bus was 13 hours…

gummy
33 minutes ago, TheDirtyDurian said: It was even better in the 40s. You mean when it was a Japanese R & R retreat