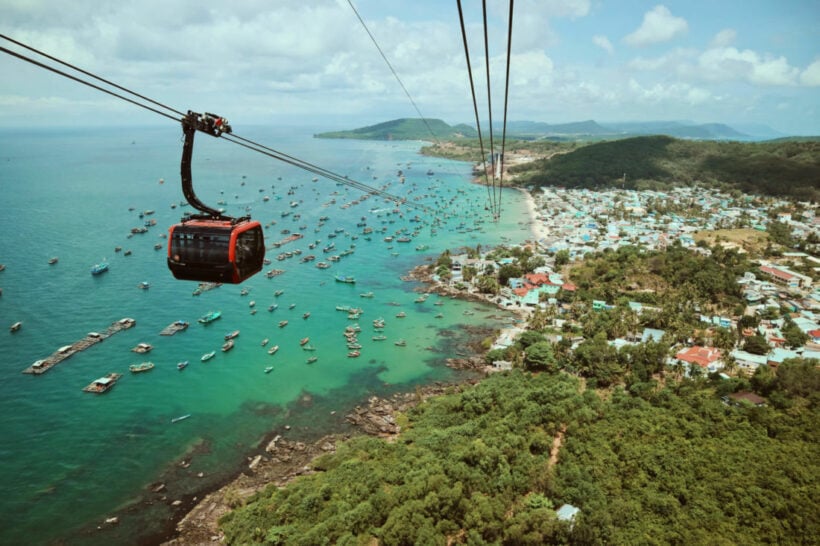 The cable-car ride from Vietnam’s Phu Quoc island to Hon Thom, aka. Pineapple Island, is a breathtaking experience. It’s an astonishing tourist attraction on an island that has ambitions to be one of south east Asia’s most popular tourist attractions.

The actual cable car ride, the longest in the world, soars over the sea, coral reefs, fishing villages and Phi Quoc’s southern islands, with amazing views all along the way. You get 360 degree vistas of the An Thoi Archipelago.

As a quick mood killer, if you’re afraid of heights, this experience may not be for you. Flying above the views below is breathtaking but you are flying a long way above the ground. Despite the windy day I travelled, the ride was very stable and you didn’t get a sense that you were wobbling around in the air.

The cable car travels from a purpose-built faux-Italian ‘ruins’ hub to Hon Thom Nature Park. From the moment you arrive, and the staff greet you as you get out of your taxi/bus/motorbike, there’s plenty of wow factor. For a small, relatively unknown Gulf of Thailand island, this is a grand experience and an enormous investment as Phu Quoc’s newest and most substantial tourist attraction.

Once you arrive at Pineapple Island, after hopping over three other islands on the way, you are greeted by a man-made beach, water park and substantial infrastructure – much of it still being constructed. Everything on the island has been constructed to serve the arrivals from the cable car, there’s no other way of getting to this remote island.

Open-air shuttles take you around the various attraction on the island, or you can just wander. There are restaurants and shops and cafés, but they’re all owned by the Sun Resorts company that has made the substantial investment. The entire project won’t be finished until 2021 but there’s already plenty to see – the cable car ride itself is spectacular enough.

The cable-car ride from Phu Quoc island to Pineapple Island takes about 25 minutes each way. The cable cars are quite substantial and can hold 20 or so people and there’s views everywhere you look.
As of 2019, the price for the Phu Quoc cable car is 150,000 Vietnamese dong, about 200 baht (cheaper than a cinema ticket these days), or US$6.40 (September 2019). Prices for children are currently set at 100,000 dong. The prices have been lowered since the attraction opened and perhaps will rise again once the construction is all complete around Pineapple Island. But even at double the price, it’s still excellent value.

Getting to the An Thoi cable car terminal for now, you’ll need to take a taxi or hire a motorbike from the tourist areas in the middle of the island. A taxi ride from the tourist hub to An Thoi was about 350,000 dong. There’s apparently a shuttle bus to the south of the island but we didn’t see it during our visit.

About Phu Quoc, it clearly has ambitions to be the next ‘go to’ destination in south east Asia with an incredible amount of investment being poured into the island – I counted about 80 new hotels being constructed along the main beach which covers about 15 kilometres of coastline. About the same size as Phuket, but 30 years behind the Thai island, development-wise, it is a curious combination of old Vietnamese fishing villages, tropical rainforests, beaches and potential.

The island is situated off the southern Cambodian coast but is controlled by Vietnam. Phu Quoc’s sovereignty has been contested in the past, as recently as fall-out from the Vietnam War and the Vietnamese invasion of Cambodia. Currently, most nationalities get a free 30 day visa-on-arrival.

The new airport is world-class and you will have no problem getting around the island with Grab, local taxis and easy motorbike rentals (they didn’t even want to see my passport). Vietnam drivers drive on the right, so be ready for that if you’ve arrived from Thailand.

The Tourism Authority of Thailand says it expects 129,000 tourists to arrive on the southern island of Phuket in the first 3 months of its re-opening. Officials still insist the island will re-open for quarantine-free travel for vaccinated foreign tourists from July 1. And according to the Bangkok Post, the TAT also plans to team up with airlines to offer 100,000 subsidised one-way domestic air tickets.

The association is in talks with Thai Airways and Thai Smile Airways about offering a 1,000 – 2,000 baht subsidy towards domestic air fares for tourists participating in Phuket’s sandbox scheme. The scheme will also be expanded to include all local carriers.

TAT governor Yuthasak Supasorn expects around 30,000 – 40,000 tourists a month, through Phuket’s sandbox model, with the primary target being long-haul markets. According to Yuthasak, 7-day packages in Phuket will be on offer for a somewhat eye-watering 150,000 – 200,000 baht per visitor, a significant increase on the 50,000 baht average spending per trip prior to the pandemic.

The Bangkok Post reports that most tourists will be required to arrive via a direct flight to Phuket. However, in the event of there being no available time slots at the airport, tourists will be permitted to transfer via Bangkok’s Suvarnabhumi Airport using a dedicated sealed terminal.

Once the other 9 sandbox areas join the re-opening, Yuthasak expects between 3 and 4 million tourists in the last quarter of the year. He says standard operating procedures to govern the entry of foreign tourists, including Covid-19 testing and guidelines for sealed routes, will be submitted to the Centre for Economic Situation Administration this month. Once approved and published in the Royal Gazette, tourism operators can launch their sales and marketing plans.

Yuthasak adds that work is needed on the supply and administration of vaccines, pointing out that new clusters in places like Bangkok could affect vaccine administration in Phuket.

“The new outbreak in Thailand didn’t affect tourism sentiment in foreign markets as the media in each country turned their focus towards the situation in India and domestic cases in their own countries. However, travel agents expressed concern that the virus situation may affect the reopening timeline which prompted TAT to confirm that everything is running as scheduled.”

He said travel agents are waiting for clear entry regulations, so they can offer packages to their customers.

The Thai Airlines Association says 7 member airlines are pushing for a meeting with PM Prayut Chan-o-cha to discuss the option of soft loans. The carriers have been seeking this financial aid for some time and have even decreased the amount being asked for, from 24 billion baht last year to 14 billion now.

The Bangkok Post reports that representatives from Thai AirAsia, Thai AirAsia X, Bangkok Airways, Nok Air, Thai Smile Airways, Thai Lion Air, and Thai Vietjet Air want to meet the PM to discuss what progress, if any, has been made on the matter. Wutthipong Prasartthong-osod from the TAA says the loans would give the carriers the support they desperately need at this time, with the association also putting the request in writing.

The airlines previously met with the PM last August to discuss the proposal, with the TAA pointing out the situation has worsened considerably since then. The ongoing third wave of Covid-19 has led to a reduction in flights, which has had a significant impact on revenue.

In addition, carriers are struggling to meet the ongoing costs of operating flights and paying workers. The association says the provision of soft loans would cushion the impact and help domestic tourism. It is also calling on the government to vaccinate airline staff, given that they are frontline workers in the tourism sector.

The Bangkok Post reports that in February, the Finance Minister, Arkhom Termpittayapaisith, was hesitant in his response to the call for soft loans, with the Export-Import Bank of Thailand asked to come up with some form of financial assistance for the airlines. According to Arkhom, providing soft loans or bringing such lending under the Public Service Account would mean his ministry having to take responsibility for the difference between market interest and soft loan interest.

UPDATE: Including a new clause…

“5.2 Participating in eating or drinking of alcohol, in the family home or in any other place of residence, must not be attended by outsiders. In addition, gathering together or the organising of any other activities is prohibited. If the person who violates or commits this offence is a foreigner, the permission to remain living in Thailand under the Immigration Act could be revoked.”

The new clause added to the extension of the restrictions includes a specific paragraph aimed at banning gatherings of people at their homes. Obviously with THIS in mind.

Phuket’s list of current ‘Covid’ restrictions have been extended until at least May 31. All the current levels of restrictions will remain until the end of the month after the Phuket Governor announced the continuation of restrictions this afternoon.

Daily new infection numbers continue to add to the island’s total of 556 since the start of April. The island’s latest wave started after a series of events, mostly Bangkok partygoers flying down for parties at Café Del Mar in Kamala, Illusion and Shelter, both in Bangla Road. The parties were organised by a Thong Lor based events company called Kolour. The daily numbers, whilst relatively stable, have not been going down as officials were hoping.

The announcement also puts any hope of a July 1 ‘quarantine free’ tourism opening in severe doubt. The island’s vaccine roll out has also slowed since the initial flurry of enthusiasm. Only 22% of Phuket’s population has currently been vaccinated (a long way ahead of the rest of the country) whilst the minimum vaccination level has to reach 70% according to the Government before they will entertain the ‘Sandbox’ opening proposal.

Entry to the island, by road or air, will remain restricted and anyone without proof of vaccination or a current PCR Covid test (within 72 hours) will have to do a full 14 day quarantine period (after May 15). The rapid Covid tests that were being conducted at the airport and Tha Chatchai Checkpoint are being stopped from this Saturday.

Notably, following the story of foreigners in Cherngtalay being fined 6,000 baht each for hosting a party at their home on Sunday night, the ban on gatherings and parties will continue.

Meanwhile, the island has reported its first death during the third wave of cases since the start of April, and a new cluster of infections in the Phoon Pon district in Phuket Town. The man that died was a 71 year old man who died yesterday morning.