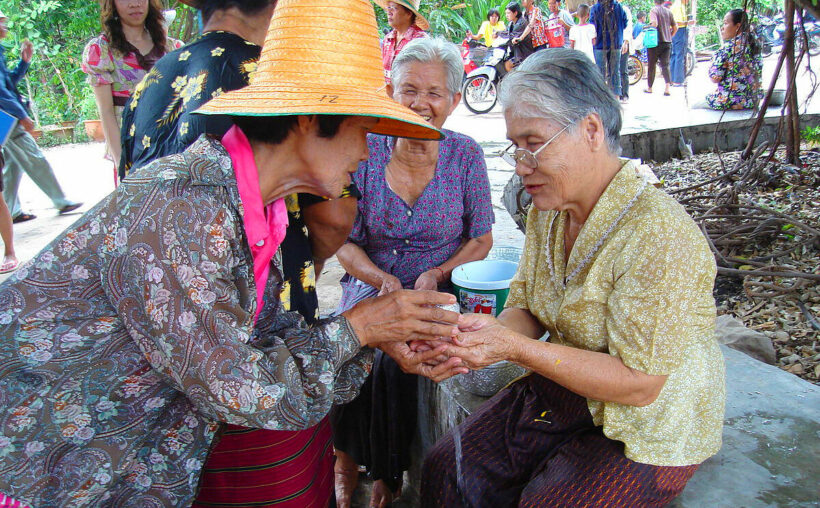 PHOTO: A more traditional Songkran is preferred this year - Wikipedia

It’s Songkran, but not as we know it. This weekend Thais start to head back home for this year’s extended national holiday. Last year the celebrations were cancelled altogether, amid Thailand’s initial lockdowns. So this year, partly aided by the mid week dates of Songkran, the government added extra days, that are topped and tailed by weekends. So, many Thais have fernangled a 10 day break, or even longer, this year.

But this year’s Songkran was already hobbled by a risk-averse government that banned water splashing, banned Songkran events and parties and urged people to continue to take precautions during the holiday. So it was going to be a more traditional, and less overly festive, Songkran this year.

That was until recent weeks when small clusters broke out, focussed around Bangkok’s nightlife venues. The quick spread of what Thai virologists confirmed as the more contagious B117 variant, aka. UK variant, of Covid-19 from these venues, suddenly made the 2021 Songkran a potential super-spreader event. Songkran is the busiest time for Thais to travel each year.

A recent Suan Dusit poll shows that 43.9% say they won’t get involved in local Songkran activities this year, or aren’t certain. 1,324 people were surveyed between April 3 – April 9 in the poll.

In other responses, 64.8% say they would perform the traditional Songkran ceremony for senior in their family, 63.3% say they will stay home and spend the time with their family; 53.7% will make merit by giving alms to monks; 52.5% would wash their own Buddha statues, 37.6% will observe Thai traditions, according to Bangkok Post.