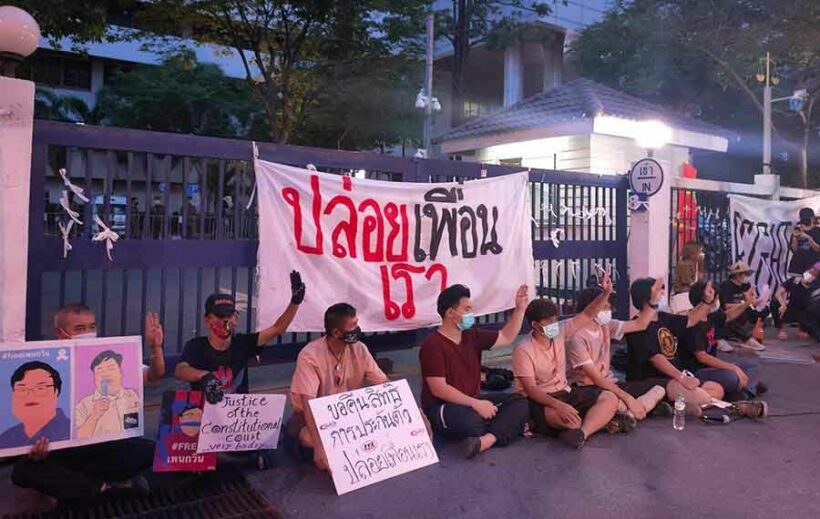 Angry supporters of the pro-democracy movement gathered outside Bangkok’s Criminal Court yesterday, after bail requests for detained activists were rejected for the ninth time. Those who had their bail applications refused include Parit Chiwarak, aka, “Penguin”, who has been transferred to Ramathibodi Hospital due to his weakened condition. Parit has been on hunger strike for nearly 50 days.

The Bangkok Post reports that yesterday, protesters marched from Victory Monument to Ratchaphisek Road, where they gathered outside the court to protest the decision to refuse bail for 7 detained activists. The rally was organised by the Redem (Restart Democracy) group, part of the Ratsadon pro-democracy movement.

Activists used spray-paint to deface signs outside the court, while using the symbolic 3-fingered salute. Objects were also hurled into the grounds, with police warning they would take action against the activists if such activity continued. The protesters dispersed after around an hour, with organisers confirming a second rally is being planned. No further details have been announced at this stage.

Anti-government protests have been taking place across Thailand since mid-2020, although the resurgence of Covid-19 has led to a decrease in public gatherings recently. Pro-democracy activists are calling for the resignation of PM Prayut Chan-o-cha, the dissolution of Parliament, and for fresh elections to be held. Campaigners also want a re-write of the country’s Constitution and most controversially, have been calling for reform of the Monarchy, until now a completely taboo subject in the Kingdom.