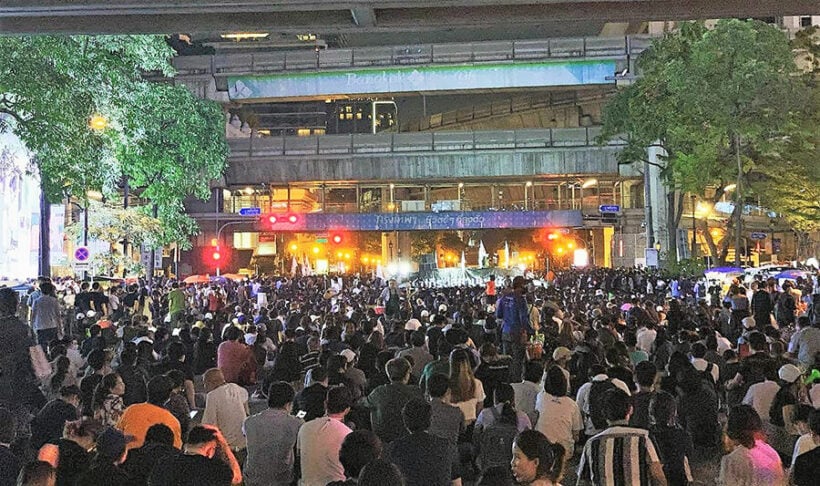 Protesters gathered at the Ratchaprasong intersection in Bangkok last night, calling for the release of fellow activists and the resignation of the Thai PM. The anti-government activists assembled yesterday from around 5pm and listened to speakers blasting the PM and Thailand’s strict lèse majesté law. The protesters are calling for the law to be abolished, for those charged under the law to be released, and for PM Prayut Chan-o-cha to resign.

Yingcheep Atchanont from the non-profit organisation iLaw, addressed the crowd, telling them that abolishing the lèse majesté law, also known as section 112 of the Criminal Code, is a priority for Thai people. According to a Thai PBS World report, he says the existence of the law only serves to frustrate public prosecutors and the police.

According to Yingcheep, the lèse majesté law “doesn’t reflect Thai identity or Thai culture”, due to changes the 1976 junta that increased the penalties for anyone convicted under section 112. He claims police and prosecutors are reluctant to release anyone charged under the law, even though they know all suspects must be treated as innocent until proven guilty.

In his address to the crowd, Yingcheep said he hoped at least 1 judge would be brave enough to grant bail to those detained under the lèse majesté law. He then made a rallying cry for the abolition of section 112, which was echoed by the crowd chanting, “Abolish 112”.

Fellow activist Attapon Buapat, aka, “Khru Yai”, also addressed the crowd, reciting a long list of mistakes allegedly made by the PM since he seized power in the 2014 military coup. This was greeted with cries of, “down with dictatorship, long live the people”, as the crowd held their hands in the air in the symbolic 3-finger salute.

Meanwhile, the former Thai ambassador to Mozambique, Rat Chaleechan, was also in attendance at the rally and expressed surprise at how many people were there, given that people were given very short notice of the location for the gathering.