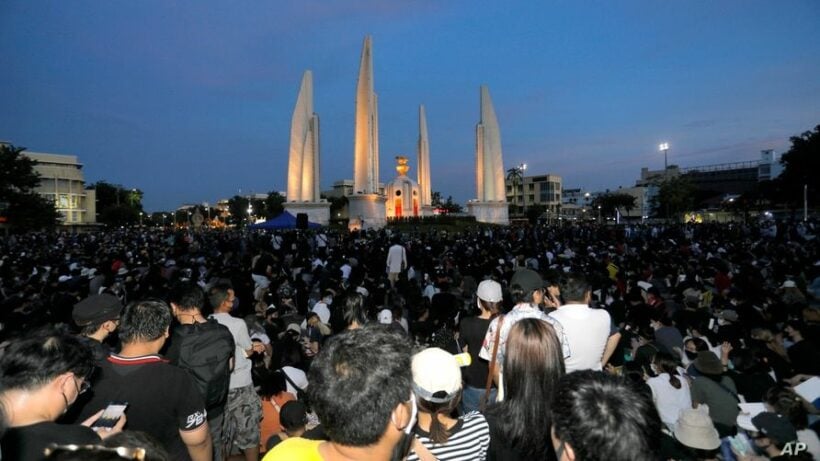 A protest rally planned for the Democracy Monument on Ratchadamnoen Avenue tomorrow afternoon is shaping up to be the largest gathering up to date. Since July, anti-government rallies have been building, in number and frequency, with a consistent list of demands outlined in a 10 point manifesto. These, broadly, call for the resignation of Thailand’s PM, Prayut Chan-o-cha, the dissolution of the parliament, the drafting of a new constitution and reform to the country’s monarchy.

Even though protesters haven’t foreshadowed marching to the nearby government house, security officials are already on alert in case the rally decides to march the 1.2 kilometres to the Government House. Any march to Government House would be largely symbolic as there will be few staff on site at the time. However the protesters have flagged that they will march to an “undisclosed location” on the Free Youth Facebook page.

Protest rallies are also being organised in other provinces around Thailand. At this stage there appears to have been no formal response from Royalist groups with any counter protests.

The banner promoting the protest also asks all attendees to bring a letter written to the Thai King.

The rally is set for a 4pm start and the invitation lists 3 key issues about the Thai monarchy, suggesting the focus of the rally will be its most controversial demands for reform of the Thai Head of State, including constitutional limitations on the Palace’s powers. The Bangkok Post reports that some 300 police officers have been put on alert to guard Government House tomorrow.

At this stage PM Prayut, also serving as Defence Minister, hasn’t issued any warnings or instructions related to tomorrow’s rally. But the deputy PM Prawit Wongsuwon, representing the government on matters of national security, is warning the protesters “not to break the law”.

Another rally has been called for November 21, this time organised by the Bad Students movement, which will again demand the resignation of the Thai education minister Nataphol Teepsuwan. The students have been campaigning for the Minister’s resignation and demand reform of what they describe as draconian school rules, mostly about conforming haircuts, school uniform rules, rote-learning education, and physical abuse and harassment by some teachers.

The Bad Student movement has been most apparent at the country’s daily 8am assembly, raising of the Thai flag and singing of the national anthem when the ‘bad students’ raise their hand in the style of the 3 finger salute, adopted by the current anti-government protests. Many students have filed complaints of harassment by teachers and school officials following their silent protests.

When next in Thailand, don’t do these things – VIDEO