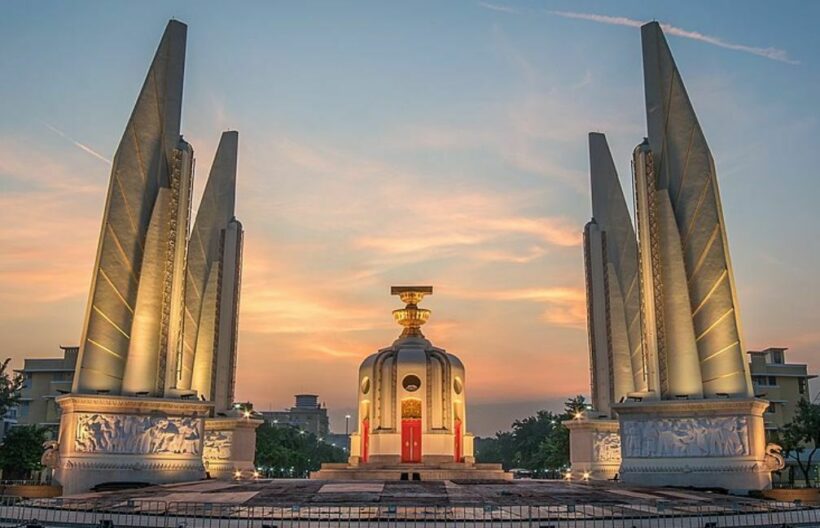 Beginning early this morning, hundreds of people gathered at the Democracy Monument in Bangkok to commemorate the 89th anniversary of the revolution that created the constitutional monarchy of Thailand. At 4:30 am on June 24, 1932, the revolutionaries with the People’s Party declared that the absolute monarchy was over.

Today, Ratsadon and other related anti-establishment groups met at the monument to celebrate the anniversary of the revolution that created the constitutional monarchy at 4:30 am to hold a candlelight vigil. The group played music and shared their political messages, all under the watchful eye of many police observing.

The group also replaced the original plaque the revolutionaries placed on the monument with a replica. That plaque brought some controversy when the original disappearing in 2017 and was replaced with an alternate message lauding the “cheerful people of Siam”. Last September, police thwarted an attempt by the Ratsadon group to replace the original plaque which was quickly removed.

The monument was wrapped with cloth banners and candles were lit surrounding it while an estimated 500 people participated in protests, led by several prominent activist leaders. The proceedings featured an art performance by a group called “Bad Student” and a reading of the 1st announcement of the Khana Ratsadon that switched the absolute monarchy to a constitutional monarchy to commemorate the anniversary.

Protesters continued to rally in front of Parliament after the ceremony to express support for the push for a constitutional amendment currently being repeatedly shot down in the government. They support allowing Thailand’s charter to be amendable, and to stop the Senate from being able to select prime minister anymore.

Security forces set up about 30 shipping containers near the police station on Ratchadamnoen Road to be ready for the protest. The demonstrators ended their event by singing the national anthem. They reconvened later in the morning to march to Parliament to present their 3-point demand calling for the constitution to be rewritten, PM Prayut Chan-o-cha to resign, and all 250 military-appointed senators to step down as well.

Political parties from the ruling government’s coalition and parties in opposition submitted 13 proposed amendments to the Thai constitution and both Houses of Parliament met yesterday to debate the amendments. Those debates are continuing today as well.

One extreme amendment proposed by a group called “Re-Solution” calls for the abolishment of all government changes brought about by the 2014 coup, including the 20-year national strategy and even the current Senate. Any amendment requires 50,000 signatures to show public support before being accepted by Parliament, and this sweeping amendment is gaining support.

AlexPTY
"commemorate the 89th anniversary of the revolution that created the constitutional monarchy of Thailand" Considering current situation i had to ask: was it worth it?

Tjampman
10 minutes ago, Thaiger said: Beginning early this morning, hundreds of people gathered at the Democracy Monument in Bangkok to commemorate the 89th anniversary of the revolution that created the constitutional monarchy of Thailand. At 4:30 am on June 24,…

Poolie
2 minutes ago, AlexPTY said: "commemorate the 89th anniversary of the revolution that created the constitutional monarchy of Thailand" Considering current situation i had to ask: was it worth it? Considering that 'an estimated 500 protestors' equals 150, I'd say…

AlexPTY
Just now, Slugger said: Considering that 'an estimated 500 protestors' equals 150, I'd say not.  i meant was is worth creating a parliament?