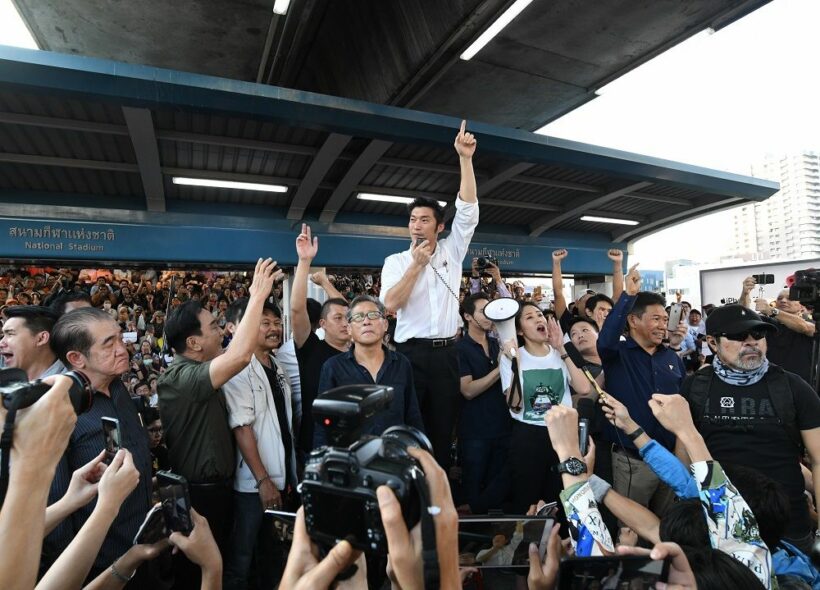 Thai people have been surveyed on their attitudes towards the December 14 “Skywalk” rally held by the Future forward Party. They responded to a recent NIDA poll conducted by the National Institute of Development Administration.

The controversial rally was held on the busy Pathumwan skywalk, outside MBK and linking the National Stadium BTS station. The event attracted around 3,000 protesters for an hour-long rally.

The poll was split over whether they agreed or disagreed with the holding of the political rally.

When asked whether they agree or disagree with the protest, 27.8% say they fully agree, because it was a peaceful demonstration to demand justice and liberty. 20.8% say they somewhat agree, on the grounds that it is the people’s right to express political opinions.

But 28.4% of the respondents told pollsters they completely disagree with the rally because it did not help national development. 15.4% said they somewhat disagree because they are bored with protests and would like the protesters fighting through the legal process.

(Percentages rounded up to the nearest .1%)

In other results from the survey, as reported by Thai PBS World…

• 30.6% of those surveyed said it is the people’s right to non-violent free expression

• 16.8% said it was a demonstration for the country’s future

• 16.6% said it was a demonstration against dictatorship and in support of democracy

• 14.6% said it was the beginning of political divide and a portent of more violence in the future

• 10.9% said it was a demonstration against injustice in society

• 10.3% it was a rally to protect Future Forward party and its leader, Thanathorn Juangroongruangkit

• 4.3% said it was a show of defiance against laws and rules in the country

1,277 respondents were polled, aged over 18 years and from different occupations, locations and educational backgrounds. The poll was run over December 16 and 17.