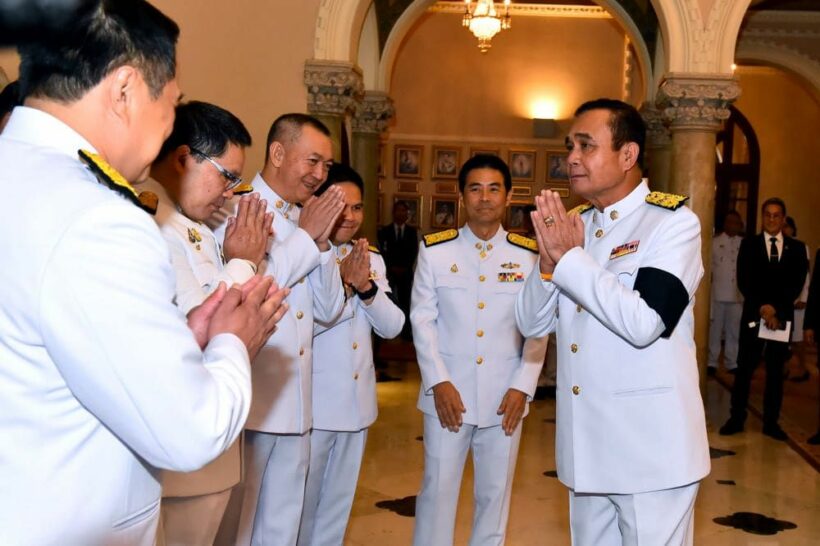 In what is being seen by some as a correction of his oath-taking gaffe, PM Prayut Chan-o-cha and cabinet ministers will receive a written message from His Majesty the King today.

A copy of the planned itinerary mentions the cabinet swearing-in ceremony of July 16, where General Prayut omitted the final sentence of Section 161 of the charter, which requires the oath-taker to uphold and abide by the constitution.

However, the PM will not be drawn on the matter, refusing to comment on the planned ceremony.

“If I spoke about it, it would take away all the excitement.”

It’s understood that the cabinet will assemble at 8.45am at Government House, and at 9.00am, the PM will present ceremonial offerings before the portrait of His Majesty the King. The King’s message will be placed on a tray to be received by the prime minister, who will then lead cabinet members in giving statements in reply after it has been read.

While Deputy PM Wissanu Krea-ngam acknowledges that today’s ceremony is a departure from the norm, he maintains that it’s not a re-swearing of the oath.

“Anyone who considers this to be a re-taking of the oath is only giving their opinion. But I will play no part in that.”

Two petitions have already been submitted to the Office of the Ombudsman, calling for an investigation into the oath-taking process.

One was from a group of lawyers led by former vice-rector of Ramkhamhaeng University Wiwatchai Kulmat, while the other was submitted by political activist Srisuwan Janya, who maintains that no word in the oath may be omitted, and alleges that General Prayut may have violated the constitution by doing so.