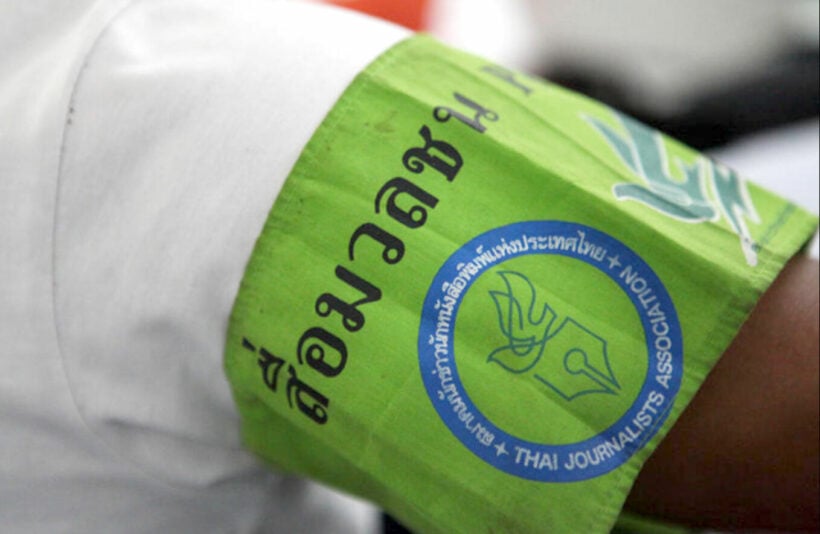 PHOTO: A lawsuit alleges police may have targeted journalists identified with press armbands similar to the one pictured above. (via Seksan Rojjanametakul)

After getting shot with rubber bullets while covering the tumultuous protests on July 18, 2 members of the press have filed a lawsuit against the Royal Thai Police for the injuries. A reporter for Plus Seven and a photographer from The Matter filed the lawsuit yesterday with the Civil Court, naming the Royal Thai Police, along with the Commissioner, Metropolitan Police Commissioner, and the Commander of the Protection and Crowds Control Division.

One journalist was shot in the hip with a rubber bullet at the Phan Fa Lilat intersection just before 4 pm while the other was shot with a rubber bullet in his left arm while opposite the Rachawinit School. They both stated they were clearly marked as journalists, wearing press armbands given by the Thai Journalists Association. They said there was no advance warning before police began to fire indiscriminately at the peaceful crowd and they believe the press was an intentional target.

They claim authorities used intentional excessive force to end the protest, calling it an unlawful dispersal. The Thai Constitution and international law both protect reporters and the police’s overuse of rubber bullets and other forceful tactics that resulted in injury to the 2 members of the press constitute a violation of press freedom according to the Human Rights Lawyers Alliance.

If the harm is determined to be intentional, it could also be considered an attempt at intimidating the press to prevent them from reporting upsetting factual information. That violates the Thai Constitution, the Universal Declaration of Human Rights, and the International Covenant on Civil and Political Rights.

The lawsuit calls for compensation from the police for the injuries and court costs to the tune of 1.4 million baht as well as a formal public apology and a pledge to never use force against the press again. They also demand police be instructed on following international human rights rules on non-lethal weapons and call for the identification of the officers who shot rubber bullets at the press.

The court dismissed the charges against the individual officers named as the Act on Liability on Wrongful Act of Officials essentially gives the officers qualified immunity, but they accepted the lawsuit against the Royal Thai Police as a whole. They also denied an additional request for an injunction against police using force against the press or in dispersing a crowd, stating that it was not an emergency since it was only a hypothetical future occurrence.

AussieBob
So they decided to get inside the protests - literally with the protesters - inside an illegal protest and they get hit with rubber bullets.  Not standing outside the group - not well away from them.  Good luck with that. …

Thomazz59
Just out of curiosity? The rubber bullets used on the crowds were fired from what make and model of firearm? Does anyone know?