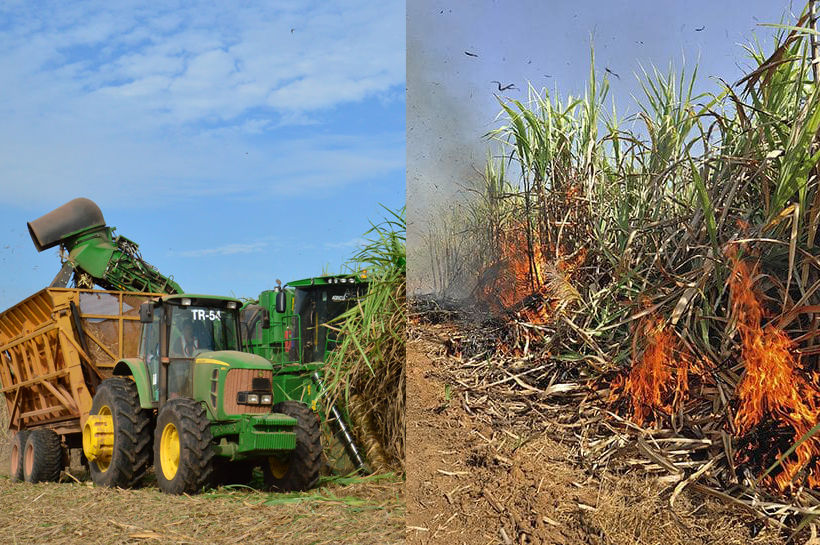 Sugar factories are campaigning to cut and harvest raw sugarcane, instead of boring it first, for processing. The conglomerates are recommending that the government offer funding at low interest rates to farmers to buy harvesters as the prices of the equipment are quite high (6-12 million baht).

They are also urging the government to purchase electricity from biomass power plants as some plants are locked out from selling their power to the Electricity Generating Authority of Thailand.

“No farmer wants to burn their field but the cost of labour is high. Factories must sign contracts with farmers to help with the harvesting.”

“Factories can encourage farmers by buying raw sugarcane while some sugarcane can be left for generating power,” according to The Nation.

Meanwhile, local sugarcane growers in Nakhon Sawan, central Thailand, are burning their fields at night despite authorities’ ban on the practice. It appears little is being done to curb the practice which is one of the main causes, if not the main cause, of the smoke and haze problems in various parts of the country throughout this time of the year.

Despite doing their burins at night, when farmers believe they will avoid the notice of the sleeping authorities, they are providing easy to locate burn-offs. Authorities banned field burning late last year in a bid to control the hazardous fine smoke particles that were drifting into highly populated city areas.

Now the sugar industry is also trying to encourage farmers to stop the practice of burn-offs.

Sugarcane harvesting started on December 1, 2019, at the same time the smog and smoke problems started in Bangkok and areas around central Thailand.

“The increase in sugarcane output over the previous year was because there were three new factories,. Also, factories increased the efficiency of their machines, improved sugar extraction as a result cane extraction capacity average is 1.0-1.1 million tonnes per day.”

“Sugarcane output this year will be lower than 30-40% of the previous year, because of the impact of drought, or only 90 million tonnes. Sugarcane extraction will be less than last year by 3 to 4 million tonnes.”