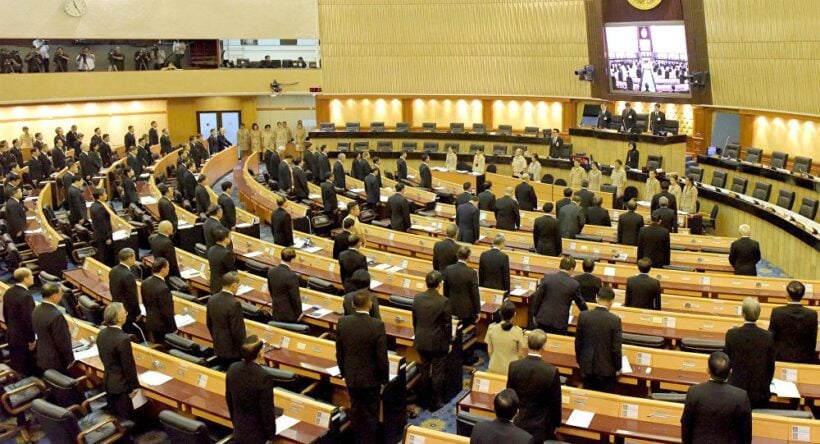 Day Two following the election and the only thing that is clear is that nothing is clear at this stage.

Pheu Thai and Phalang Pracharat are both claiming the right to form a government with support of like-minded parties.

The two rival parties, the pro-democracy Pheu Thai and the pro-Junta Phalang Pracharat, are locked in a close battle to form the next government with little difference between the two in terms of strength in Parliament.

The Phalang Pracharat Party claims it has secured the “popular vote” from people nationwide. But Pheu Thai argues it has won the most number of MP seats and therefore should be invited first to form the government.

With 95 per cent of votes counted as of last night, the pro-junta party grossed 7,939,937 votes nationwide while the Shinawatra-backed Pheu Thai was second with 7,423,361 votes.

In this election, under the new Constitution, the total number of votes for each party, irrespective of whether its constituency candidates win or not, are combined to determine how many MPs each party gets in total.

According to current media calculations, the total number of seats from constituency and party-list, Pheu Thai will get the most number at 138 while Phalang Pracharat will have 119. The EC has not calculated the number of party-list seats at this stage and may take the rest of the week to come up with a published result.

Though both parties can make equally strong claims to form the government, analysts believe it will not be easy for either to form the next Parliament.

According to the latest figures, the pro-junta camp can gain around 242 seats with support from parties who are clearly opposed to Pheu Thai. 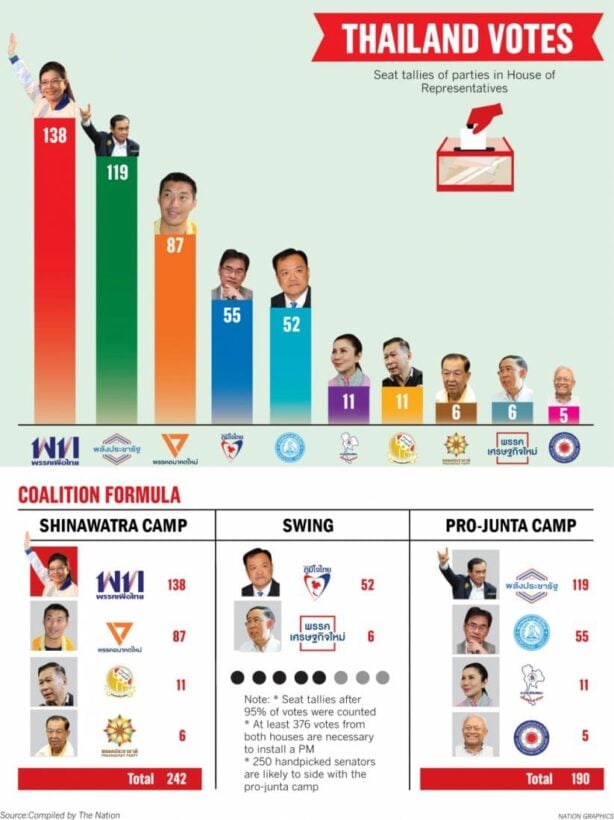 Pheu Thai secretary-general Phumtham Wechayachai said that the party was seeking collaboration with other pro-democracy parties and would discuss the PM candidate to find the best option for the country.

Pheu Thai leaders have also started putting pressure on the junta-appointed Senate, stressing that senators must be free of any influence and respect the people’s voices as reflected in the election.

“Every vote is counted and has meaning. We have legitimacy, as we have gained the most trusted votes. Our winning results (with the most votes nationwide) show that voters have given us the mandate to govern the country,” he said at a press conference after the EC announced the unofficial results.

“We will ensure that we will do everything according to the mandate of the voters who want us to move the country forward peacefully,” he said.

Anutin yesterday did not commit to joining any side, saying he would do whatever was in the people’s interests.

Meanwhile, the Future Forward Party celebrated victories in 30 constituencies in its electoral debut. But its leader, Thanathorn Juangroongruangkit, said he had no intentions of bidding for the top job.

“The prime minister must be nominated from the party with the most MPs,” Thanathorn said firmly at a press conference yesterday.

“I’m ready to be the PM. But we want to uphold democratic traditions and we won’t bring in any conditions that would lead the country to another deadlock.”