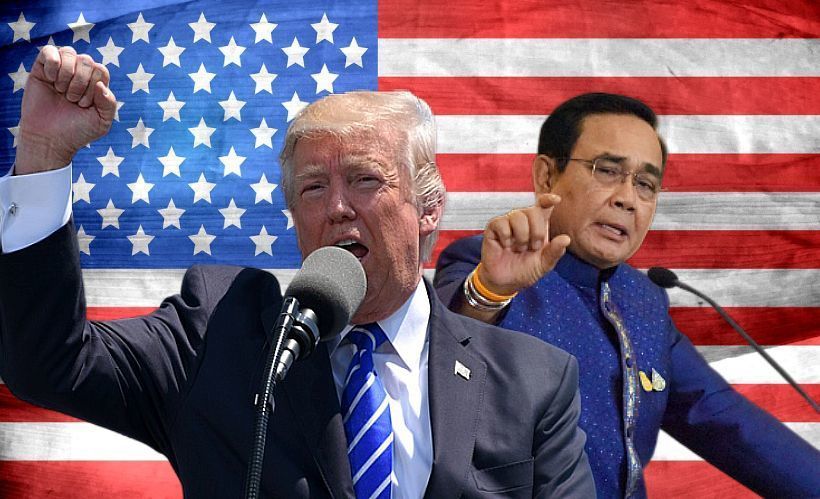 US President Donald Trump announced on Friday that the US will suspend 1.3 billion dollars worth of duty-free trade for certain items from Thailand, claiming that Thailand has not taken steps to protect labor rights.

In a letter to US House of Representatives Speaker Nancy Pelosi and Vice President Mike Pence, Trump said he had suspended duty-free treatment because Thailand had not taken steps to “afford workers in Thailand internationally recognized worker rights.”

The US Trade Representative’s office said the move amounted to a suspension of 1.3 billion dollars in trade preferences under the Generalized System of Preferences (GSP) program. At present, the GSP program covers around 4.5 billion dollars worth of Thai exports.

The suspension, which will take effect in six months, affects about a third of Thai products included in the program, including all of Thailand’s seafood exports to the US.

While the list of products subject to GSP suspension has not been made available the absence of GSP preference is likely to dampen the already grim prospects of Thai exports this year.

Thai exports in 2019 are likely to see flat growth or even a contraction for the first time in four years, due to the gloomy global economy, the prolonged trade war between the US and China and the strong Thai baht, according to several economic think tanks.

The US suspension does not come as a total surprise. Earlier this year, Thailand narrowly avoided being labeled a currency manipulator on the US Department of Treasury’s watchlist because Thailand did not meet the conditions set by Washington.

Thailand’s current account surplus accounted for over 7% of the country’s gross domestic product in 2018, against the limit set by the US Treasury of 2%. Moreover, the amount of foreign currency purchases did not increase from the previous year. Thailand’s trade surplus with the US was 19 billion dollars, approaching the limit of 20 billion.

While the US action toward countries labeled as currency manipulators isn’t clearly defined, Washington can unilaterally end the GSP benefits to take action against high trade deficits with its trading partners.

The US announcement will likely further impact Thai fishery business after an issue in the European Union (EU).

Even though the EU announced in Januarythe lifting of a yellow card for Thailand in recognition of its progress in tackling illegal, unreported and unregulated (IUU) fishing, Thailand’s fishery exports to the EU have not recovered to pre-IUU levels.

Thailand is the second biggest beneficiary of the US’s GSP, after India, which was the largest GSP beneficiary with 5.7 billion dollars in imports to the US in 2017. Washington decided to terminate India’s designation as a beneficiary developing nation in May this year.

A wide range of Thai export items currently receive GSP benefits. The biggest beneficiaries are electrical appliances and electronics like air conditioning and electronic components, and washing machines, followed by food and agriculture products and machinery.

The prospects for Thai exports are not promising. Last year, the USTR’s office accepted a petition from the National Pork Producers Council challenging Thailand’s eligibility for the GSP program.

The American Federation of Labor and Congress of Industrial Organizations (AFL-CIO) also filed a petition to Washington to review of Thailand’s GSP eligibility, based on labor issues.

123 kilograms of marijuana seized at border