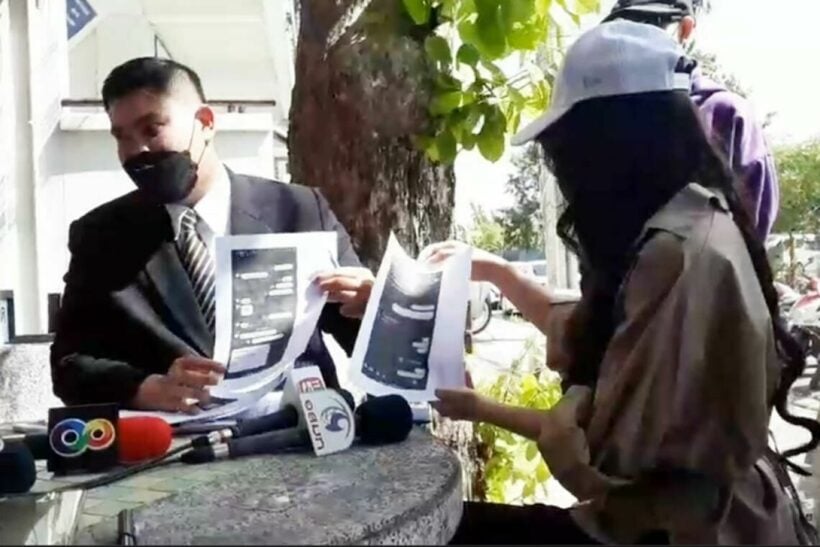 PHOTO: A woman and her lawyer show LINE chats to police offering her money to drop rape charges. (via Siam Rath)

A woman brought her lawyer to the Klong Tan Police Station after waiting 5 months for a response to her reporting an alleged rape at a party in Klong Toei in August. The incident took place in the Bangkok district at a hotel where the 27 year old Thai woman was hired to be a bartender.

The woman said she was hired along with two other women they deemed “entertainment women” to work at a party from 10 pm to 4 am with 5 men. She said she didn’t know the other women involved and that she was paid 3,500 baht for the event. The Thai woman explained she had been working in a pub but, since all nightlife venues have been closed for nearly a year due to Covid-19, she has looked for other work and freelance gigs such as mixing drinks at parties like this.

The woman recounted that around midnight that night two men, age 36 and 37 who she named, proceeded to rape her in the toilets. She reported the crime to the police on August 17 but for 5 months now she has seen no action on the case.

The police say that rape tests given at the hospital when the incident was reported were inconclusive and that condoms found at the scene were tested for DNA but did not fit the men that she accused of raping her, so the case stalled. Police did not offer any information on any other potential evidence, witnesses, or interrogations.

According to the woman and her lawyer, she was discouraged from pursuing any charges. She says police told her to drop the case and not to seek justice against her alleged attackers. Her lawyer showed chats made via the LINE app claiming the chats presented evidence that friends of accused rapists had offered to pay the woman 20,000 baht in hush money if she dropped the case and did not pursue it.