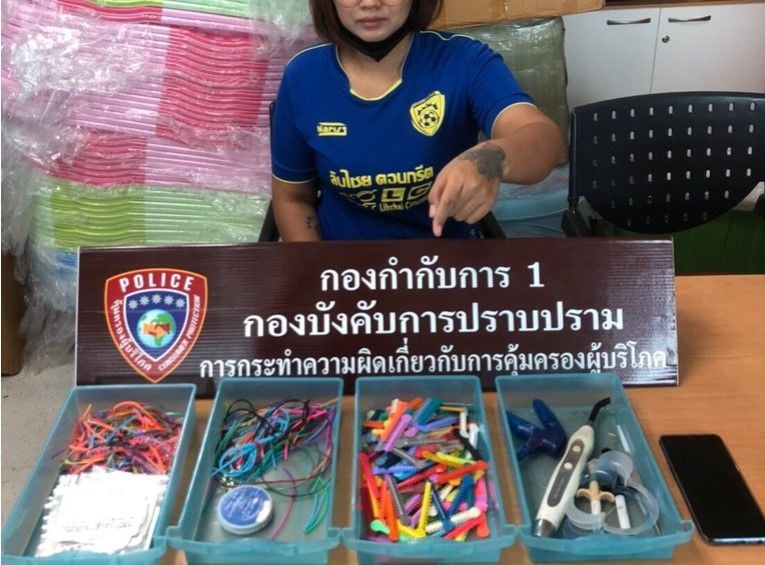 Natsuda Sriwichian ran the business out of room at the Salaya Eua Arthorn apartments in the Sam Phran district, according to officers from the Consumer Protection Police Division who were investigating the case. She sold the braces on Facebook under the page “Yim Sayam” and also offered a fitting service.

A police officer posed as a customer and wrote a post on the Facebook page about making a purchase. The officer was told to go to the woman’s apartment. When the officer arrived and entered the apartment, he saw the woman had dental tools used for fitting the braces.

The woman was arrested for allegedly selling the illegal braces. Police searched the apartment and say they found more than 600 fashion teeth braces and dental tools. Police say the woman admitted to selling the braces and offering a fitting service.

Teeth braces have become a fashion trend in Thailand and are perceived as a symbol of wealth, but fake braces are known to contain toxic metal, such as cadmium, as well as mercury, arsenic and lead. Earlier this year, Thailand’s Department of Medical Services posted a warning about the “dangerous trend,” saying the toxic chemicals from fashion braces can be absorbed in the body and cause mouth bleeding, ulcers and other infections. Some cases relating to the toxic braces are reported to be fatal.