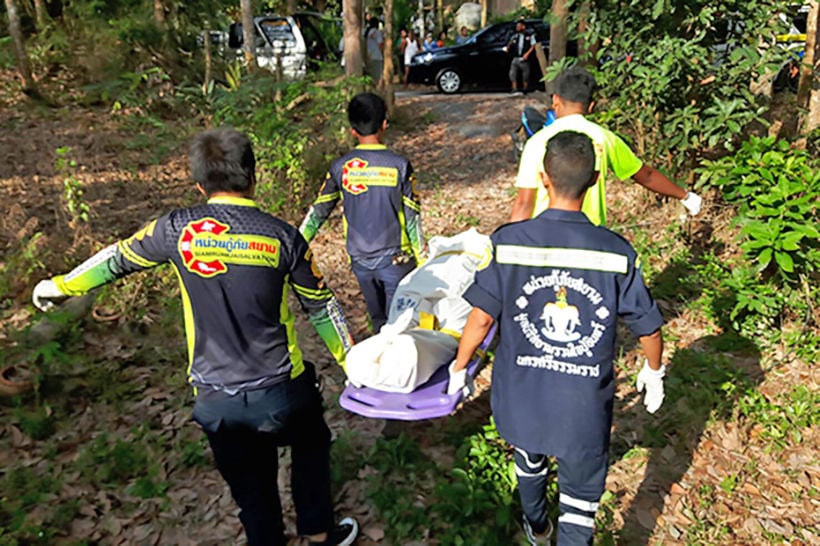 Volunteers take the body of hit man Yuthana Chukaew to hospital for an autopsy after he died of unspecified causes at a house Nakhon Si Thammarat this morning - Nujaree Raekrun, Bangkok Post

An infamous killer, long sought by police, died this morning of  “an unspecified illness” at a house in the southern province of Nakhon Si Thammarat. A team of police officers and a doctor from the district hospital went to the house after being  informed of the death of the wanted hit man, identified as 49 year old Yuthana Chukaew, known to the public as “Sua Liam Thungpho.” Yuthana was found lying dead on the open platform of the house, wearing a camouflage T-shirt and a loin cloth.

Local villagers told police that Yuthana came down from a hideout in nearby mountains to stay at his mother’s house several days ago. He lost consciousness and died this morning, evidently of heart failure.

Yuthana was wanted in several murder and drug cases that took place in three different district of the province. In September 2015 he was involved in a shootout with a police unit that left one officer injured. He manage to break through a police siege and escape.

Yuthana’s younger brother Thirayuth, aged 40, is also wanted on murder and drug charges. Years ago, when police surrounded his house, he surrendered for fear of becoming the victim of an extra-judicial killing. In 2017, he broke out of a Nakhon Si Thammarat prison along with a fellow inmate.