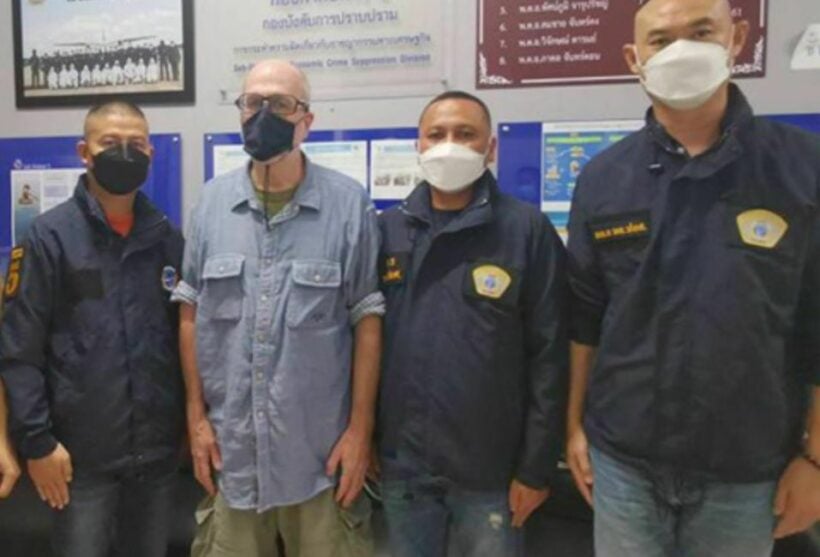 PHOTO: An American man wanted for bank fraud was captured 1 day before the statute of limitation. (via Economic Crime Division)

In the sort of scene usually reserved for action movies, an American man wanted for bank fraud was captured at the last minute, one day before the statute of limitation expired on his crimes. Thomas Grimm, a 63 year old man from the US, was arrested at a hotel in Hua Hin accused of a scam 15 years ago where he defrauded bank customers in a phishing scam.

The Economic Crime Division police managed to catch up with the fugitive in the Prachuap Khiri Khan resort town after a 15 year hunt stemming from an e-banking fraud scheme in October of 2006, a crime with a statute of limitation of 15 years.

According to the ECD, the scam was a 3 man operation with Grimm and 2 Thai nationals. The team tricked bank customers into revealing their confidential information that allowed the thieves to access bank accounts and steal money from them. The scam worked by sending phishing emails to bank customers sending them to a bogus website that mimicked their bank’s home page.

That page had them “log in” and collected their details to give the scammers access to the customer’s bank accounts allowing the criminals to withdraw cash from the accounts. According to the police, one victim had hundreds of thousands of baht withdrawn from their account.

The investigation into the bank fraud began in February 2007 when Kasikorn Bank filed a complaint against the two Thai scammers, a man and woman, alleging that the duo colluded to defraud their customers. They were arrested, and during interrogation they named Grimm as a co-conspirator.

Police obtained a warrant for Grimm’s arrest for the bank fraud from the Thon Buri Criminal Court on Monday, and police managed to catch up with him just in time, one day before the 15-year statute of limitation expired.

RobMuir
Grimm would be the most famous faranger business family name in Thailand since 1867. https://bgrimmgroup.com/history/ An amazing history.  I often see Harald and Caroline at the Polo. A big hello from Robbie to them both if they are reading this.
JamesR
What amazes me is how some people fall for theses scams, we know a bank or any other standard company will never cold call you and ask you directly for your account details, passwords etc via phone or email or…
Jason
The ol' statute of limitations trick....missed it by that much!! (Maxwell Smart).
Jason
I always look forward to the obligatory selfie with the arresting police :D Only in Thailand ;)

palooka
Assuming that he didn't do 90 day reporting and apply for his new visas, so how does he survive 15 years and reside in a hotel (I assume residential Hotel) in Hua Hin?