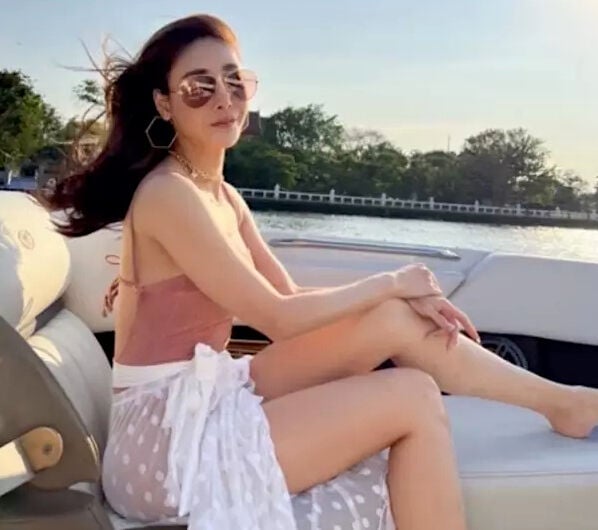 A portrait of Thai actress Nida Patcharaveerapong aka "Tangmo" on the speedboat the day she drowned in the Chao Phraya River in February 2022. Credit: unknown

Recklessness. That’s the conclusion police came to about what caused the death of Thai actress Nida “Tangmo” Patcharaveerapong, who fell from a boat and drowned in the Chao Phraya River in Nonthaburi, north of Bangkok, on the night of February 24.

Police presented a summary of their monthslong investigation yesterday and announced charges against 6 suspects, including all 5 people who were on the boat with the actress that night, before submitting their report along with boxes of collected evidence to public prosecutors for indictment procedures.

At the press conference on Tuesday at Provincial Police Region 1 headquarters in Bangkok, Pol. Lt. Gen. Jirapat Phumjit said that detectives were satisfied with the evidence and witness testimonies, saying there was no need to investigate further. According to their report, police determined that the actress fell from the stern of the speedboat on 10:34pm.

He said that her death was not a murder. Instead, he concluded that someone’s “recklessness” on the boat caused the actress to fall overboard and drown, but he did not say exactly who was to blame. In other words, it was a case of accidental manslaughter.

“Tangmo didn’t fall into the river by her own recklessness, but there was someone whose recklessness led to her death.”

Phumjit said investigators concluded that after Tangmo entered the river, suction force generated by the outboard motor pulled her downward toward the propeller, which cut up her body, creating the 26 wounds, including the large gash on the inside of her right thigh.

Two rounds of autopsies concluded that the actress died of drowning. No drugs or other substances were found in her system, which could have incapacitated her.

Moreover, police ultimately concluded that, due to lack of witnesses, it was impossible to prove whether the suspect known as “Sand” had told the truth when he claimed Tango had fallen from the stern of the boat while peeing. However, police said they believed the other suspects when they said they were aware someone had gone to the back of the boat then disappeared, though they claimed not to have seen the incident for themselves.

During the lengthy investigation, which spanned two months, investigators questioned 124 witnesses, examined 88 pieces of evidence, reviewed 200 video clips, and collected a total of 2,249 documents, which they submitted in a dossier of 8 large files to public prosecutors yesterday. According to commander of Nonthaburi police, Pol. Maj. Gen. Paisan Wongwacharamongkol, this was sufficient evidence to press charges against the 6 suspects and bring the investigation phase of the case to a close.

Here’s an overview of the charges pressed against each of the 6 suspects:

After the police announced their charges, the 6 suspects went to the Nonthaburi Provincial Prosector’s office, where they acknowledged the charges and were released on bail until the court date set for May 27.

Following yesterday’s press conference, the actress’ mother, Panida Siriyuthanyothin, expressed her satisfaction with the conclusions of the investigation and the resulting criminal charges pressed against the 6 suspects. She said she would file a civil case to sue them for more than 30 million baht in damages, having caused the death of her daughter Tangmo. Moreover, now that the investigation has come to an end, she would contact her daughter’s Christian pastor about cremating the body.

kalyan
Dear Editor / Writer. I have a query on this below sentences. please see the below bold and underline sentences, are they same ? Here’s an overview of the charges pressed against each of the 6 suspects: Tanupat “Por”…
kalyan
i like the 30 million baht damages claim by mother, whether your daughter is dead or alive, upon death also i will find ways to fetch money ! 30 million baht !
Fanta
3 minutes ago, kalyan said: operating an unlicensed vessel operating a vessel without a license; Think of the boat as a car. 1: drive a car with expired plates/registration 2: driver had no drivers license
LandOfSmiles
The above explanation provided by Fanta is correct.

Don’t get sick at Suvarnabhumi Airport! Emergency response can be pricey.