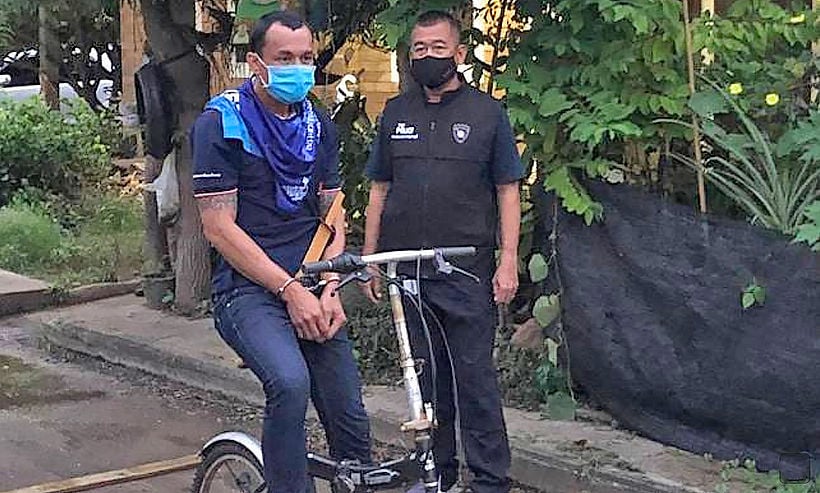 Police in the western Kanchanaburi province have arrested a man for the August 6 murder of a sugar factory repairman in Bo Phloy district. 50 year old Boonthad Lawa, an employee in the factory’s repair and maintenance section, was found dead in a room of the workers’ dormitory last Monday. The body had 6 knife wounds, was bloated and “emitting a foul odour” when it was found.

Police invited the victim’s relatives and close associates for questioning. In a search of his room and belongings, officers found that his strap bag, which contained cash and ATM cards, was missing. Further investigation indicated that the ATM cards had been used to withdraw about 100,000 baht from Boonthad’s accounts.

By examining ATM security footage, police learned that the person who withdrew the cash was 44 year old Apichart Phachan, a worker at the same sugar factory. Apichart was invited for questioning yesterday. Police say he initially denied involvement in the murder, but after being shown the ATM footage, he confessed. According to police, Apichart gave the following account:

He and Boonthad frequently met for drinking sessions, and he learned that Boonthad was a money lender. Late on the night of August 6 he went to Boonthad’s room with a knife and knocked on the door. When Boonthad opened the door, he stabbed him several times in the chest and slashed his throat. He grabbed Boonthad’s strap bag and returned to his room.

The bag contained 200 baht, a gold ring and 3 ATM cards with PIN numbers written on them. The next day, he drove a motorcycle to the banks and withdrew money before fleeing to his home village in tambon Tha Pha in Ratchaburi province. On the way, he burned the ATM cards and threw the knife into an irrigation canal.

This morning, Mr Apichart was brought to the workers’ living quarters for the routine reenactment of the crime.