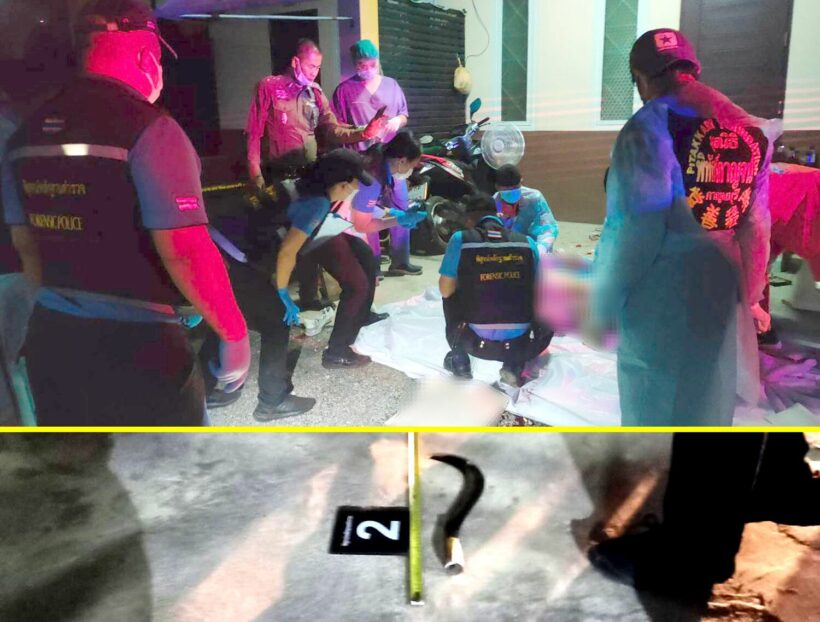 Police are looking for a suspect in an attack and stabbing of 2 British men in Kanchanaburi that killed one and seriously injured the other. The attack took place early this morning at 3:55 am in front of a house in the Muang district of the western province of Thailand. Police, tourist police, and forensic officers led by the chief to the Muang Police Station raced to the crime scene.

According to police, the two British men were playing loud music on a radio in front of their house as they sat at a table drinking beers. They were surprised by a Thai man with a long sickle-shaped knife confronting them and attacking them. That sickle and a pair of shoes believed to be owned by the attacker were recovered from the crime scene.

55 year old Sean Kewin suffered serious stab wounds when was admitted for emergency treatment in the nearest hospital. But 49 year old John Marcus was found face down in a pool of blood near his chair in front of the house with a stab to his neck that, despite the hospital’s best efforts, resulted in his death.

While no one has been arrested or taken into custody over this incident, police believe that they may know who the suspect is. There’s a resident in the same neighbourhood who is showing fresh injuries similar to what might be expected to be sustained during a knife fight with two men. The Thai man, said to be around 22 or 23 years old, also has a history of mental health issues which could potentially explain the seemingly unprovoked attack on the British men, save possibly annoyance at the loud music late at night.

Police have taken that man into custody after it is reported that angry neighbours attacked him believing he was the killer, hospitalising him. As of now, Kewin remains in the hospital, and police are still investigating the details of this brutal stabbing.

HolyCowCm
1 hour ago, AmySukwan said: Help where you can Yeah, save the quiet wonderful Siam Fighting beetles. Lovely creatures.
Grauwulf
On 1/23/2022 at 8:27 PM, ctxa said: That is utter BS. As the article mentions Law Enforcement took 50 minutes to arrive on scene after the murder took place. So what you are suggesting, is to let a man scythe…
HiuMak
Pommies are abundant on the news lately
Chaimai
30 minutes ago, HiuMak said: Pommies are abundant on the news lately Does that bother you? I can dig out some news om Aussies if you wish.

steve860
1 hour ago, HiuMak said: Pommies are abundant on the news lately Which news?